Last New Year's Eve I wrote about the German traditions my mother's family's ancestors observed. In 2014 I have been researching and writing about my father's Scottish ancestors as it was a part of his family tree that was difficult to research before the Internet. I thought it would be appropriate to write about Hogmanay, the Scottish New Year's Eve.

Historians believe the Scots inherited the celebration from the Vikings, who paid attention to the passing of the shortest day of the year. Christmas was nearly banned in Scotland for approximately 400 years -- from the end of the 1600s to the 1950s. During the Protestant Reformation the Church of Scotland portrayed Christmas as a Catholic feast. Many Scots worked over Christmas. Therefore, they celebrated New Year's Eve and New Year's Day, which was a holiday, with family and friends. Many weddings occurred on New Year's Eve so family could join in the celebrations. 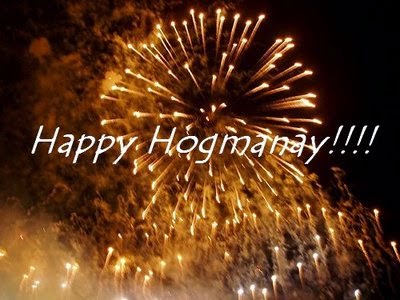 On Hogmany, parties are held and gifts for small children are distributed. Old traditions include cleaning house, clearing debts, and taking out the ashes before midnight. The underlying belief is to clear out the vestiges of the hold year, have a clean break, and welcome in a young New Year on a happy note. Immediately after midnight, many sing "Auld Lang Syne," by Robert Burns, who wrote the lyrics though the tune was in print 80 years Burns' published version.

"First footing" -- the first foot in the house after midnight -- is not as common as it used to be. To ensure good luck, the first foot should be male, dark and should bring symbolic coal, shortbread, salt, black bun and whisky.

Today Scottish families welcome friends and strangers on Hogmanay and wish everyone a "Guid New Year." Bonfires and fireworks displays are also common. And, in what I believe to be the epitome of good sense, January 2nd is also a holiday, giving Scots time to recover from several days of merry making!