Could This Be Possible?

I have to tread very carefully in this post because all but three of the people on the chart below are still living. 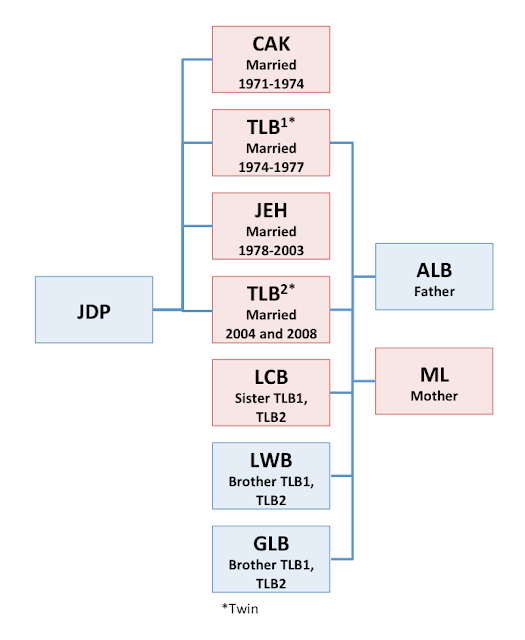 JDP is my fourth cousin once removed. He died a few years ago and I was able to find an obituary which provided a good start tracing his children. Several were listed but it was unclear who their mother was. So I began searching for birth records. I learned that all of his children were born during his third marriage and that he had step-children.

Next, I searched to see how many times he had been married. From what records are currently publicly available, it appears he was married five times to four different women -- marrying his surviving spouse twice.

As I reviewed the list of wives, I noticed that two had the same initials and the same birth date. I came very close to merging them. However, they had different first names and both had been married a few times to different men. They were obviously different people. Perhaps TLB1* and TLB2* were twins? Could it be possible?

I found a birth record for TLB1* but could not find one for TLB2*. I entered her parents' names and looked for other children they may have had. I found two additional birth records -- for LCB and GLB. I did not find one for LWB. LWB was definitely a child of ALB and ML; they were the parents listed in his obituary. Three siblings were also listed: LCB, TLB2*, and GLB, but not TLB1*.


What do you think? Did my fourth cousin once removed marry twin sisters?
Posted by Schalene Dagutis at 5:46 AM

Email ThisBlogThis!Share to TwitterShare to FacebookShare to Pinterest
Labels: Texas