Henry Crawford Tucker, Jr. (1805-1883) was my sister-in-law's 4x great grand uncle. He was born in Laurens County, Georgia. According to another Tucker ancestor, Blanche Pitts Smith, "...he joined the state militia in 1836 and fought the warring Creek Indians. He was elected captain of his company and served with distinction…He helped form and served as pastor of Sardis Church in 1840." He was married three times and had 32 children!

In 1860 secession fever was sweeping the state as evidenced by this drawing of of a demonstration in Savannah's public square: 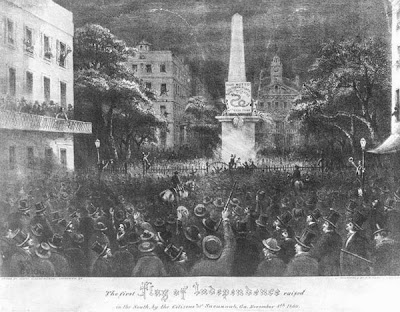 In 1861, Henry Tucker was one of two representatives from Colquitt County to the Georgia Secession Convention held in Milledgeville, then the state capitol. He was one of 301 representatives who voted unanimously to secede. His feeling about secession are detailed in Robert Dennard Tucker's book, William Tucker of Throwleigh, Devon, on page 70:

"Livestock being more important to south Georgia than cotton, there were far fewer requirements for slave holdings and fewer concerns among its citizens regarding the prohibitive tariffs and cotton trade restrictions being imposed by the northern [states through their representatives in Congress]. Local sentiment strongly favored remaining in the Union. Rev. Tucker left home inclined to vote accordingly. At the convention, however, he was swayed by the majority and ultimately voted for Georgia to secede from the United States of America. Once committed, his family and neighbors fully supported the cause. Five of his sons fought for the Confederacy. Three served in Company H, 50th Georgia Infantry -- John as an officer, Henry as a sergeant, and Richard as a private. George  served in Company C, 11th Georgia Cavalry, and Matthew fought with Company G, 12th Georgia Infantry. Henry was a fatality and Richard was severely wounded." 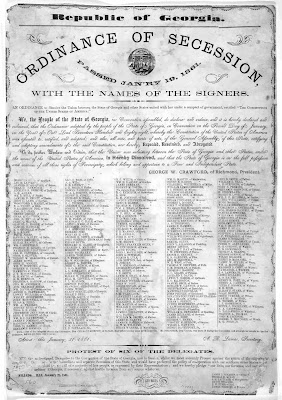 Photo courtesy of the University of Georgia. A full size image may be found here

Tucker's name is the tenth from the top in the second column and is listed as H C Tucker from Colquitt. The original ordinance was printed on satin and is held by the University of Georgia's Hargett Library.

With what important historical events have your ancestors been involved?

_______________
Henry Crawford Tucker, Jr., was born in 1805 in Laurens County, Georgia, to Henry Crawford Tucker, Sr., and Sarah "Sallie" Hunter. In 1824 he married Nancy Sapp in Montgomery County. They had eight children before her death in 1841. He joined the Georgia Militia in 1836 and fought against the Creek Indians. On 10 May 1842 he married Margaret "Peggy" Watson in Thomas County. They had eleven children before she died in 1856. The next year he married Rebecca Bryant on 9 February 1857. He served as one of two representatives from Colquitt County during the Georgia Secession Convention in 1861, voting to secede from the Union. He and his third wife had 13 children. Henry Crawford Tucker, Jr., died on 2 February 1863 and is buried at Bridge Creek Cemetery in Colquitt County, George.