A few weeks ago a new DNA match enabled me to push part of my tree back three more generations to an eight times great grandfather, who was born in the Duchy of Oldenburg and immigrated to New Amsterdam in 1655. His name was Arent Isaaczen Van Hoeck, which was later anglicized to Van Hook. A descendant wrote about book about Arent and his descendants in 1998, which I have ordered.

Arent Isaaczen Van Hoeck was born in 1623 in Hookseil, Duchy of Oldenburg (now in Lower Saxony, Germany). He was born during the Thirty Years' War (1618-1648), one of the most destructive wars in European history. Entire regions were decimated with famine and disease significantly reducing population. Arent moved to Amsterdam in the Dutch Republic as young man. Perhaps he did so for a chance at better opportunities.  The 17th century was considered the Dutch Golden Age because the tiny republic dominated world trade. Arent became a Dutch citizen in January 1652 and that same year married Sara Van Cliet on 30 March 1652 in Amsterdam. I suspect she died sometime before 1655 as Arent married Geertje (Sophronia) Everts in January 1655. Both his marriages took place in Dutch Reformed churches. Arent and Geertje immigrated to New Amsterdam in the spring of that same year. 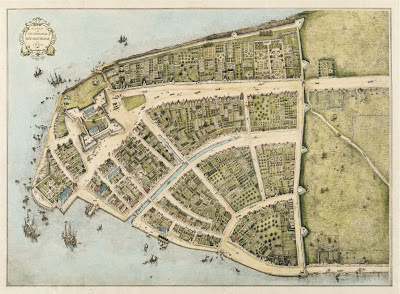 Brief History of New Amsterdam
The colony of New Netherland had been established in 1624 and grew to encompass all of present-day New York City and parts of Long Island and New Jersey. The largest town was New Amsterdam, located on the tip of Manhattan Island. On 27 August 1664 several English frigates sailed into the harbor of New Amsterdam and demanded the surrender of the colony. The articles of capitulation were signed on 8 September and New Amsterdam was renamed New York, in honor of of the Duke of York, who later became King James II, in June 1665.

England and the Netherlands were quickly at war after the take over of New Amsterdam. The Treaty of Breda ended the Second Anglo-Dutch War in 1667. The Netherlands did not press their claims for New Netherland and England administered the former Dutch colony. Peace did not last long, however. The Third Anglo-Dutch War broke out in 1673 and the Dutch military briefly occupied New York City and named it New Orange and installed their own governor. The 1674 Treaty of Westminster ended the Third Anglo-Dutch War and the former Dutch territory reverted back to English control and New Orange became New York City again.

After being a citizen for a year and six weeks and paying 20 guilders, Arent was awarded small burgher-rights and became a shoemaker. Only great and small burghers and employees of the West India Company could practice a profession or work at trade. Arent moved his family to Albany, New York, in 1659. The colony was called Beverwijck. Geerjte died in 1663 or 1664. Shortly after her death, Arent returned to New York City with his three children.


After the English take over, the citizens of New Amsterdam/New York City swore an oath of allegiance and became citizens of England. Arent married Stynie (Christina) Laurens, widow of Jan Hendricks, the year of the official English takeover. The couple had five children and I descend from their son Laurens (Lawrence), who was born about 1670. Arent moved his family to Brooklyn in 1676. Sometime before Stynie's death in 1682, they had moved again to Kingston, New York.

Arent married for the fourth time in 1685 to Lizbeth Stevens, widow of Abraham Valdinck. Lizbeth died sometime in the early 1690s and Arent married yet again to Maria Jan Van Hobocken, widow of Otto Laurenzen, on 12 January 1696. Arent died before October 1697 when Maria appeared on a tax list as Widow Van Hoeck.

____________
I am much indebted to Ancestry member boconnell179, who wrote a wonderful 23-page narrative of Arent Van Hoeck's life, which was exhaustively researched, and shared via his family tree.
Posted by Schalene Dagutis at 5:42 AM