On 23 December 1952 my fifth cousin once removed murdered his three children, ages 4, 2 and 4 months, attempted to kill his wife and himself. After he was paroled in 1968, he co-authored a book. In the epilogue he described killing his children and his life after. I blogged about it last year in a series of posts:


This discovery really threw me for a loop. I had often said I inordinately fond of my black sheep, but this was beyond the pale. Yet, he wasn't the first murderer I discovered among my ancestors or even the first one who killed a family member. The previous fellow was actually a closer relative but the crime happened a long time ago. What made this so different?

After each post, I would send the link to my youngest brother, John. We're 10 years apart in age and have always been very close. I've felt for many years he was the really scary smart one in the family. What I most appreciate about his brain is his analytical ability and the way he explains his position. I typically operate by instinct so I usually find his point of view thought provoking. I asked him for his assessment of Archie because I found myself disliking him intensely, especially his excuses for why he killed his children which included, in my view, blaming his mother. Blame being the key word. 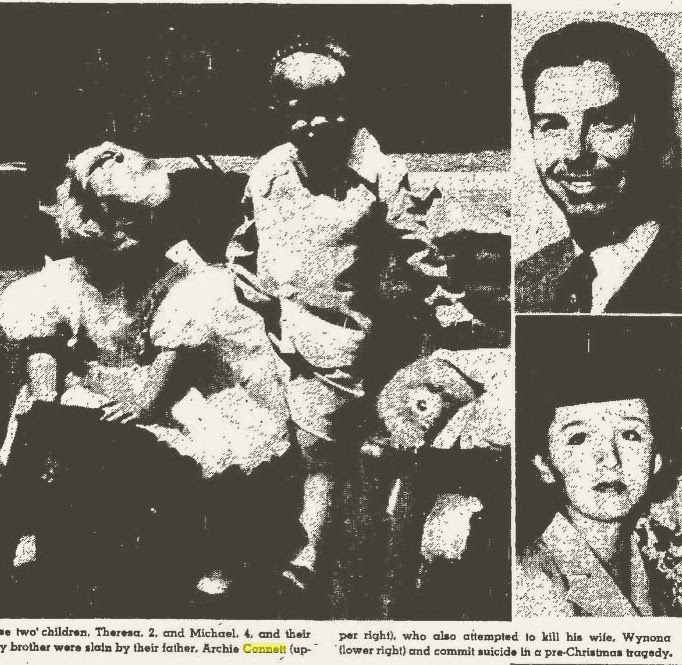 Published in the Oakland Tribune on 24 December 1952

My brother's take on the events:

Your wanted my evaluation on this. I assume I have a somewhat different take on it than you.

I think there is a difference between blame and reason that you may not be taking fully into account. I think in the epilogue of his book Connett is talking about the reason he committed the crime. The part about his mother, the need to feel accepted, etc., is the reasoning behind why he did what he did. I don't think he is blaming his mother. Of course, there is no rational explanation for killing your three children, so the logic of any reason for doing so will obviously be twisted.

Let's use another example which removes the absurdity of killing your children from the scenario. Let's examine the case of a general who lost an important battle. His memoirs will likely be filled with lots of reason why he lost the battle, including things that were both in his control and beyond his control Some readers will call these excuses, but I tend to see them as explanations of why the battle transpired the way it did. Imagine an After Action Report in which a general says simply, "I take full responsibility for the defeat. I screwed up." It's good that he takes responsibility, but it doesn't provide any lessons for future strategists to learn from.

The more interesting question to me is should Connett have been paroled, either earlier or at all? This comes down to the question of whether a criminal is incarcerated for rehabilitation, punishment or to protect the rest of society. Connett was not the typical criminal; he was well educated and a productive member of society who committed a heinous crime in one spasmodic episode. In his pleadings for parole he made much of the fact that he had been "rehabilitated," as evidenced by the work he did with therapy groups. I think he missed the point. Since he was not a habitual criminal, rehabilitation means nothing. You can't rehabilitate for a one-time spasm of anger. Connett's incarceration was for pure punishment. I think the judge understood this point and I tend to agree with the judge when he wrote, "...if ever a man in the State of California had committed first degree murder, he was the man; that if ever a man deserved to go to the gas chamber, he was the man; that he should never be released from prison."

The fact that Connett was up for parole after only 3 years and 4 months is the most amazing point of this whole series of blog posts. That's a little over one year for each child. Incredible! Thankfully, the judge was around for 15 years to ensure the denial of his parole. Published in the Gastonia Gazette on 25 March 1971

I responded a few days later after thinking long and hard about my brother's email...as I said he is always thought-provoking:

I believe you have it right and I did not. Your analogy about the general is completely valid and really made your point. It doesn't come with so much associated anger as a child killer. I think your point about punishment motivating the judge is particularly on point.

I also agree that being eligible for parole after such a short time is totally unbelievable and I now understand why the "do the crime, do the time" movement got so popular.

My brother ended the exchange explaining his thoughts on parole:

I think about parole differently depending on the nature of the crime and criminal.  The guys who are running the prisons obviously want well behaved inmates, so I understand if good behavior is rewarded with a better chance at parole.  But it should only by 10 - 15% shorter sentence, not the incredible case below where a 10 - life term is eligible for parole in 3 years.  In cases where the primary point of the incarceration is punishment, then I don't think there should be any lessening of the sentence, except for the small reward for good behavior noted above.  In cases where rehabilitation is possible, such as someone whose crime was motivated by a drug addiction, then I think that inmate could be offered parole much sooner provided their addiction is overcome.

This is just one of the many reasons I love my baby brother so much. He keeps me on my toes. You can't have these types of conversations with just anyone. Plus he uses semicolons properly. What's not to love? I haven't got him totally interested in genealogy yet, but he is intrigued by DNA ethnicity results so I believe I've got a chance. What do you think?
Posted by Schalene Dagutis at 5:36 AM