Henry Crawford Tucker, Jr, is the 4th great uncle of my sister-in-law. An article I found on Ancestry.com had this to say about him: 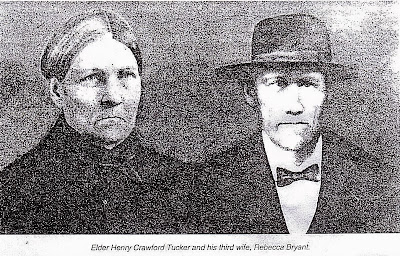 Henry Crawford was born between 1793 and 1805 in Laurens County, Georgia, the son of Elisha Tucker and Sarah Hunter.(1) He grew to manhood in Montgomery County, Georgia, and married Nancy Sapp in 1824 in that county. About 1825 he moved his growing family to Irwin County. In 1836 he joined the state militia to help defend Georgia against the warring Creek Indians. He was elected captain of his company and served with credit and distinction for the duration of that war.

After the uprising was quelled, Henry Crawford Tucker returned home and was soon ordained an Elder in the Primitive Baptist Church. He helped form and served as pastor of Sardis Church from January 1840 well into 1843. For the next forty plus years, Henry Crawford Tucker preached the gospel every Sunday in some Primitive Baptist church in either Colquitt, Brooks, Thomas, or Berrien counties. During all those years of his ministry, he never received one dollar in payment. 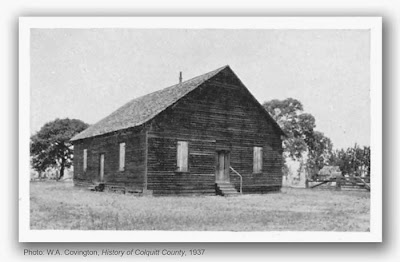 Family stories say that although far from handsome, Henry Crawford had sparkling blue eyes and a very charming personality. Wherever he went, people crowded around, for he was such a pleasure to listen to and talk with.

Henry Crawford never held public office. The only time he ever served Colquitt County in any official way was as its representative to the Secession Convention in Milledgeville in 1861, where he signed the Ordinance of Secession. 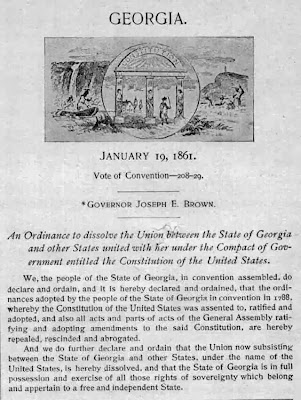 The land in Irwin County where Tucker made his home was taken into Thomas County when that new county was created. Henry Crawford continued to acquire land until he had a vast holding, containing thousands of acres.

During his seventeen year marriage to Nancy Sapp, they became parents of eight children. Nancy died in July 1841 and was buried at Old Bethel Church cemetery in present day Brooks County.

Ten months later, Henry married Margaret "Peggy" Watson on 10 May 1842 in Thomas County. Together they had 11 children. Margaret died about 1856 and was buried at Bridge Creek Cemetery.

In 1856 Colquitt County was created and Henry Crawford Tucker's land was cut into that new county. The large double-pen log house that he had built many years earlier was quickly outgrown. He had a total of 18 sons and 14 daughters. To accommodate such a great number of sons, Henry Crawford built a dormitory behind the house, furnished with homemade bunk beds and sawdust on the dirt floor, where the boys slept. At one time, there were 9 sons sleeping there. 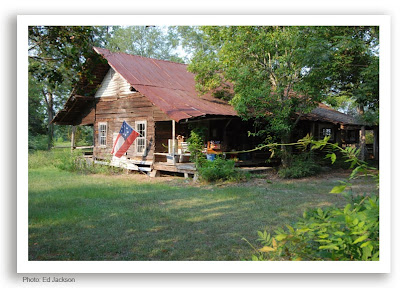 James Solomon, the 16th child, told a story about an event he remembered from his youth: When he was about 14 years old his father told him to meet him with the wagon at noon the next day at the spring head. Henry Crawford Tucker left the next morning before daylight and when James arrived at the spring head, his father had already killed and skinned four deer. They loaded the deer into the wagon and the family had fresh meat for awhile.

Henry Crawford Tucker married Rebecca Bryant on 9 February 1857. She was born in 1834 in Georgia, the daughter of Timothy Bryant. They had 13 children.

In 1883 in his eighties, Henry Crawford Tucker was still a remarkably vigorous man in both mind and body. Had he not suffered a terrible accident, he would probably have lived many more years. The old preacher was on his way into Moultrie one winter morning when his horse became frightened and bolted. Henry was thrown from the buggy and became entangled in one of the wheels, which had to be removed to extract him. He died from the injuries soon afterward on 2 February 1883. He was buried in Bridge Creek Cemetery. When Rebecca, his widow died in 1909, she, too, was buried at Bridge Creek.

On 24 July 1995, a monument marking the grave of Henry Crawford Tucker was unveiled and dedicated. Numerous Tucker descendants had contributed money for its purchase and were present for the service. Blanche Pitts Smith, great-great-granddaughter, had researched the Tucker family for years and was a speaker at the dedication ceremony, telling the story of Henry Crawford Tucker and reading the list of all his children's names. The monument, which replaced the original homemade, crumbling marker of this remarkable man, will be treasured for many generations to come. 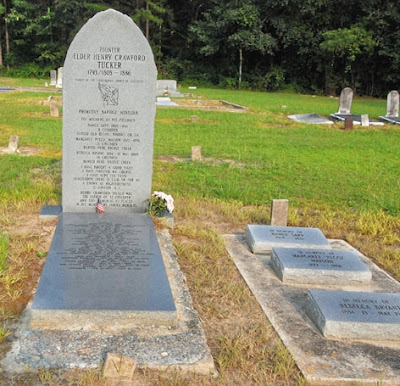 Henry Crawford Tucker was a second cousin to Colonel Henry Tucker (1713-1787) of Bermuda. Colonel Tucker's children went on to become U.S. Treasurer, Justice on the Virginia Supreme Court, and father of a director of the East India Company. I wonder if Henry Crawford and his Georgia relations knew any of this.