Today is World AIDS Day, which was designated in 1988 to raise awareness of the AIDS pandemic caused by the spread of HIV infection and to mourn those who have died of the disease. It seems like an appropriate day to write about Roxburgh Lyle Richmond, my fourth cousin.

All we know about Roxburgh Lyle is from his death certificate. He died on 7 June 1985 at St. Paul's Hospital in Vancouver. Before his hospitalization, he lived at 78-1385 West 15th Avenue in Vancouver. He was 32 years old, single, and worked as a make-up artist in the entertainment industry.

Roxburgh died of respiratory failure and pneumocystis carinii herpes pneumonia, which is a condition often seen in people with compromised immune systems. The contributing cause of death was acquired immune deficiency syndrome, or AIDS. 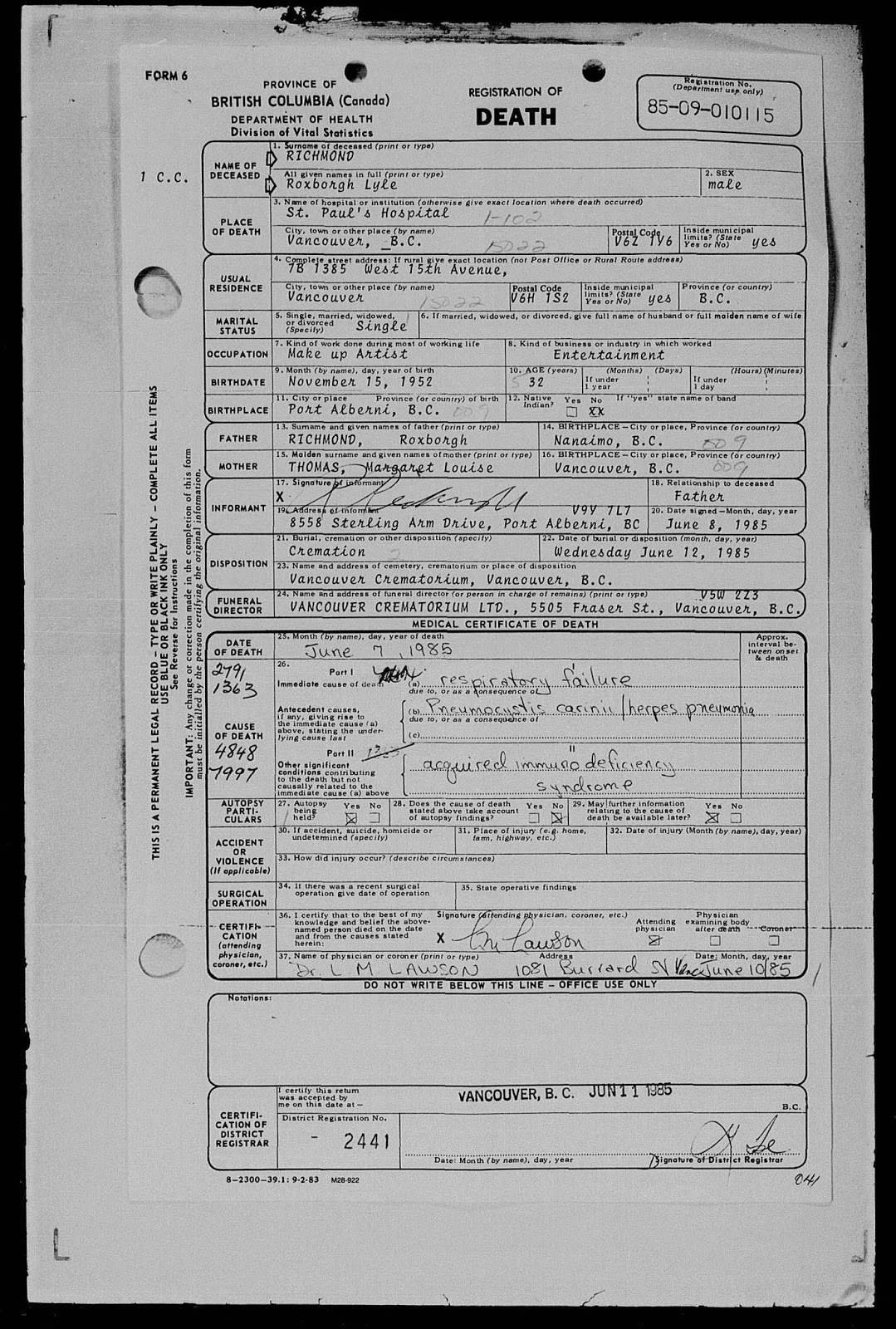 I was surprised to see AIDS listed as a cause on a death certificate in 1985. The first AIDS diagnosis was made in 1981 and the first case was reported in Canada the next year. In Vancouver the year Roxburgh died, 63 cases were reported, AIDS Vancouver opened its first office, the Red Cross began testing their blood products, and Rock Hudson openly admitted to having AIDS. 1985 was an early time in our fight against the disease. The Pasteur Institute did not isolate the HIV virus until 1983.

Vancouver had become a mecca for gay young men, who left the plains of Canada and headed for the city by the sea because they knew they were "different." In Vancouver, they found an alternative life style more suited to their sexual orientation and sense of community in a diverse group of men like themselves. I have often wondered if that is the reason Roxburgh moved from his parent's home in nearby Nanaimo to Vancouver. His father was a typical hardworking man who had been a plumber, owned a saw mill and worked for a local water board. He loved motorcycles, hunting, fishing and camping. How different Roxburgh must have felt as a young man among his family. I hope he found peace in his life before he died.