For the second week of Amy Johnson Crow's 52 ancestors in 52 weeks challenge, I am writing about another poet. This one described herself as a "frustrated writer and poet." I found her in a most unusual, non-professional genealogist sort of way while trying to verify information from my Dad's family tree.

According to my Dad's genealogy research, his first cousin once removed, Harold Muir married Marion Ternes in Michigan sometime after 1940. Dad wasn't as fussed about sourcing his research discoveries as I am. So off I went in search of a source citation for this marriage and to learn more about the Ternes family.  I discovered Marion's relatives owned the Ternes Coal and Lumber Company and were a prominent Detroit family. Harold was the grandson of a coal miner and worked as a machinist at a Ford factory, so he definitely married up! I got interested. I had lived and worked in the Detroit area in the early 1980s and found the city's rise and fall absorbingly fascinating. I got more interested, spending a lot of additional time researching a "by marriage" family than I normally would.


A Google search result led me to the Live from Tormville! blog and a wonderful discovery. After reading the voice tape transcripts the blogger bought at a garage sale (can you believe that), I fell in love with Edith Mary Madeline (Ternes) Reynolds[1] and I think you will, too. Her real name was Freda Isobel Watson and she was adopted. 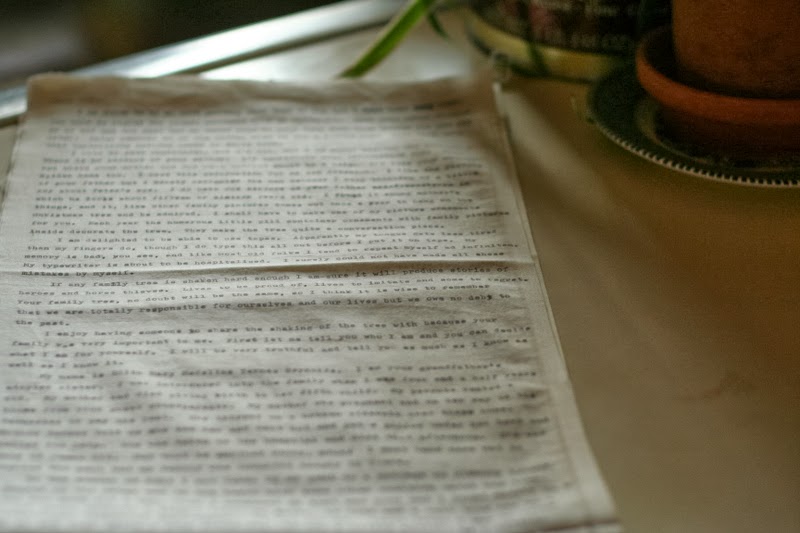 Transcripts of voice tapes sent to a relative circa 1958 -- about 5-1/2 feet long! Photo by Sharyn Tormane, author of Live fro Tormville!

My name is Edith Mary Madeline Ternes Reynolds. I am your grandfather's adopted sister. I was introduced into the family when I was four and a half years old. My mother had died giving birth to her fifth child. My parents rented a house from your great grandparents. My mother was pregnant and on her way to the Ternes to pay the rent. She tripped on a broken sidewalk near their home. Mother Ternes told me she saw her and went out and put a pillow under her head and called for help. She was taken to the hospital and died that afternoon. She was only 26 years old.

In the summer of 1911, I was taken by my aunt to a cottage on Hickory Island. I played in the water and on the beach with some other children until nap time. I was put down for a nap, when I awakened my aunt was gone and I found myself in a strange place without a single familiar face. At four and a half this can be a devastatingly traumatic experience. It was for me.

Years later  I came to terms with it and even wrote a poem about it. It was a little morbid as I recall. I am a frustrated poet and writer -- verses at the drop of a hat so don't drop yours or I'll surely write about it. Two of the boys I played with before my world upended were Norman and Orrin, the two surviving children of the Ternes family. They had had five children, three of whom -- Chester, Mildred and Edith -- had died in infancy or early childhood. It was to fill the void left by the two daughters that the Ternes decided to adopt me. They changed my name from Freda Isobel Watson to Edith Mary Madeline Ternes. I found this out when I was taken to school in the fall. From the middle of summer until school time, I wondered why no one ever called me by my name. Every time anyone spoke to me, they called me Edith. I did not know who Edith was. This was very confusing to me because my name was Freda. No one ever called me that again.

I so wish I had a photo of Edith, but I do not...yet. What I do have is a current photo from Google Maps of the home the family moved to in 1918 on 15th Street in Detroit. It's a sad testament to a once great and powerful city: 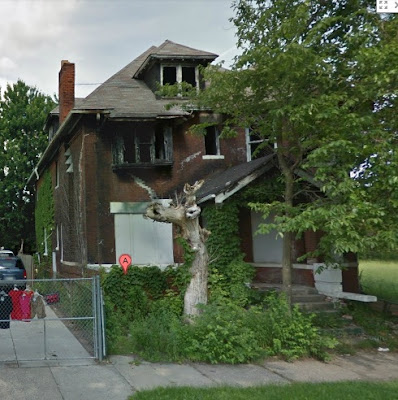 I excerpted Edith Mary Madeline (Ternes) Reynold's transcripts in several posts. She had an absolute flair for writing and I felt like I knew her:
Because of my fascination with Edith, I dug as deep as I knew how into the Ternes family. That research lead me to a wonderful connection that I've enjoyed getting to know through email.  Here is the story of her grandfather -- why he moved to Panama and how he died:
Today is the 15th anniversary of Edith's death. Did you fall in love with her, too?

_______________
[1] Edith Mary Madeline (Ternes) Reynolds was the first cousin of the wife of my first cousin 2x removed. She was born on 16 December 1906 in Michigan; married Elmer Reynolds about 1938; and died 12 January 1999 in Dearborn, Wayne, Michigan. She was adopted by Anthony Francis and Madeline Laura (Loranger) Ternes when she was four and a half years old. Her birth mother was Isobel Watson, maiden name unknown.
Posted by Schalene Dagutis at 5:55 AM