52 Ancestors #4: Was Grandma's Grandma a Hussy?

Last year I virtually met Sarah Semple[1], a cousin who lives in New Zealand. She had written a book about our common Semple ancestors and we have been collaborating on and off ever since on my grandmother's grandmother, Margaret (Semple) Muir and her children. My grandmother was Alice (Muir) Jennings and her mother died in 1909 when she was only three years old. Alice lived with her grandmother until 1920 when Margaret Muir died.

Not too long ago I was purging my inbox, trying to create order out of chaos. I ran across an email my New Zealand cousin sent which included what she knew about James and Margaret (Semple) Muir and their children from her book on the Semple family.  I compared it to my tree and updated the document based on what Sarah and I had discovered in our recent research.

Reviewing all the information together in document form versus the structure of tree or pedigree chart got me thinking. Did James and Margaret (Semple) Muir ever live together in the U.S. and were some of her children even his? Or did any of the children belong to James? Maybe grandma's grandma was "hussy."

In order try and formulate an answer to that question, I compared the birth order and names of her children to Scottish naming conventions. There was one glaring unconventional name:

Was she mad at her husband, James, when Alexander was born? Was Alexander his child? I know Margaret and James eventually divorced, but when did they separate? So many questions I'd never considered before.

I created a timeline of documented events in Margaret's life to determine if any event could shed light on the question: 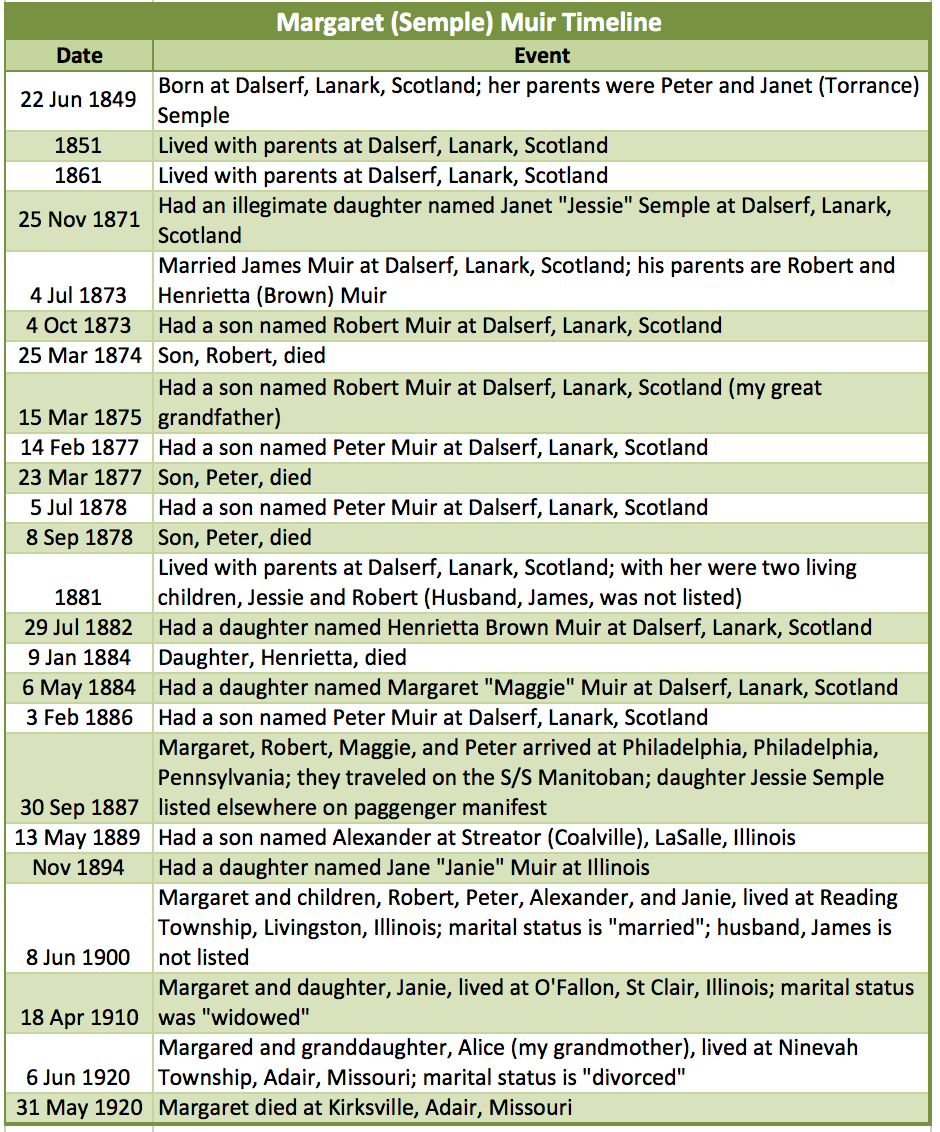 At no time since their marriage did the documentation I've been able to locate to date about this family indicate that Margaret and James ever lived together. Based on when the Scottish census were enumerated, the only chance for that was in 1881 and then after Margaret immigrated to the U.S. in 1890, 1900, 1910, and 1920.

At this point in my research I cannot verify that James Muir, Margaret's husband, even immigrated to the U.S. I did find a lot of James Muirs in the U.S. and in Scotland, who were coal miners, like he was; but I cannot prove any of them are MY James Muir. I have found a 1920 census record for a James Muir of the right age and occupation who lived in Nineveh Township, Adair, Missouri, who was a boarder in a house rented by a widow named Ida Logsden. In 1920 Margaret (Semple) Muir was also living in Nineveh. My working assumption is he was MY James Muir. I have found no record of his death.

So what do you think? Was grandma's grandma a hussy?

_______________
[1] Sarah Semple has become an email and research buddy. I've read almost all of her books and she she is great at discovering obscure documents. Sarah has also written a guest blog, which was terrific.

NOTE: I wrote about Margaret's oldest living son, Robert Muir, my great grandfather, and the research challenge he represents here. Robert's son, Henry, was problematic as well and I wrote about that here. The entire Muir clan has done their best to test my research skills!
Posted by Schalene Dagutis at 5:25 AM