It Only Took 10 Years

Adam Dagutis, my husband's paternal grandfather, came to the United States in 1894 or 1895 to mine anthracite coal in eastern Pennsylvania. He was recruited in Europe by agents of the coal company. They had tried Irish and Scottish miners, but found them too troublesome. Eastern Eurpoean workers were considered more obedient and less prone to labor strikes.

Family lore said Adam considered himself Lithuanian, but every census taken after he came to the United States said he was born in Russia.  It turns out both are correct.  The passenger list for the Hamburg-Amerika Shipping Line's SS Pratria, which is written in German, is more precise than the English version.  On that manifest, Adam Dagutis is listed as coming from Tracki, Russia.  Trakai was historically part of Lithuania, but was Russian territory at the time of his birth as it had been annexed by Russia in 1795.


The area has variously been known as Tracken (German), Trakai (Lithuanian), Troki (Polish), and Trok (Yiddish). Other variations seen on official documents are Troky and Tracki. No wonder I had so much trouble!

Today the town is considered a tourist destination and it does look really beautiful. I especially love the old wooden houses.


And the most famous sight in Trakai, the castle on an island in Lake Galve: 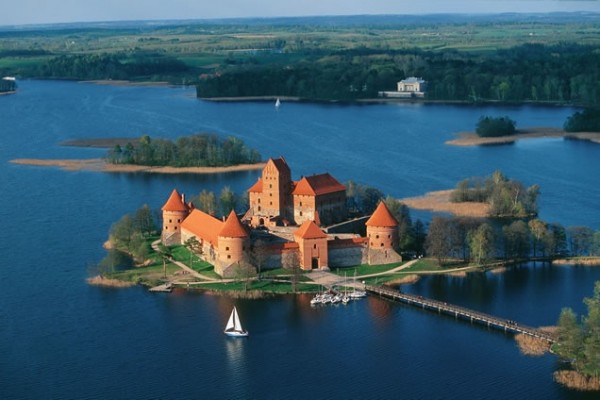