The Pension Saga...And a Mystery Wife

I've written about Joseph Jackson Moncrief and his brothers before. He is my sister-in-law's great great grandfather and served in and survived the Civil War.  On 21 Dec 1852 he married Elizabeth Renfroe in Crawford County, Georgia, and they had at least two children.  Elizabeth died on 03 Feb 1902 in Limestone County, Texas, apparently having moved to the state with her son, William Henry Moncrief.  She is buried in Kosse Cemetery and as you can see from her grave marker definitely thought she was Joseph's wife:


However, in 1889 Joseph Moncrief was still in Georgia and apparently married (according to the 1900 census) to a woman named Sallie.  They had at least three sons. No public family tree includes Sallie's maiden name and no official documentation of the marriage has been located.

Joseph submitted his initial application for an indigent soldier's pension on 05 Apr 1901 and re-applied several more times throughout his life, apparently with no success.  When he died in 1919, his widow, Sallie, began pestering the state for the pension.  She sent a sworn affidavit from someone who supposedly attended their wedding. The letter provides her maiden name and the date of their wedding.


A happy ending you may think. But no. Sallie died tragically three years later.


And this is why I love death certificates so much.  On 04 May 1935 she suffered an accident in her home. Her clothes caught on fire and caused extensive burns to her body, arms and legs.  She died eight days later.

This is one of the letters Sallie wrote inquiring about her pension, which I also found in the Georgia Virtual Vault: 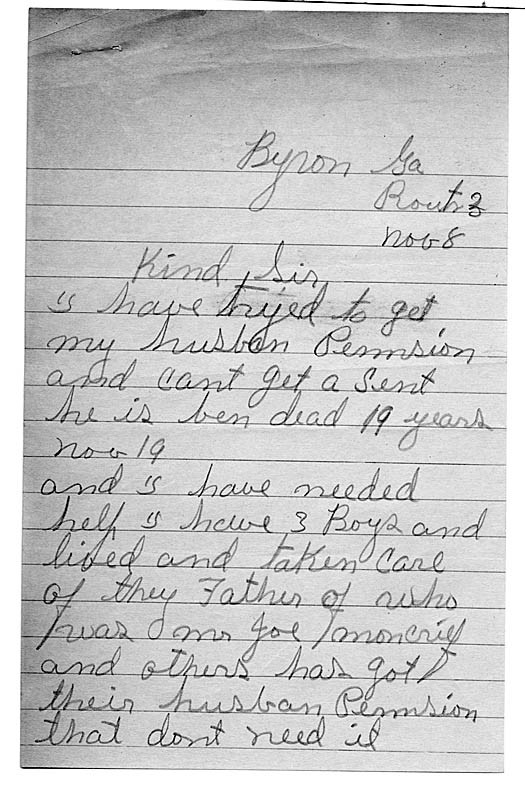 The Internet has made genealogy research so much easier than it was 15 or 20 years ago and more fun, I think, because it's so easy to find interesting tales. I often wonder if Joseph and Sallie were actually married. If you married a Civil War soldier in 1881 or later, you were not eligible for a pension. So an 1880 marriage was quite convenient. The only issues are the living first wife and no documentation of the marriage.
Posted by Schalene Dagutis at 5:16 AM