This post is in honor of my Mom and Dad.  They've been married 56 years and, as Mom said in a recent visit, they've had an easy marriage all things considered, though the going has gotten pretty tough these last few months. 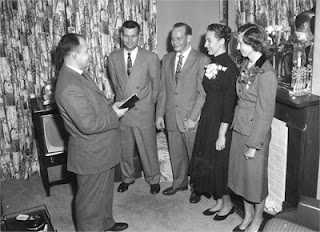 They were married in my Dad's parents' home in Arlington, Virginia, on a Friday evening, by a volunteer fireman, who was late to the wedding because he was busy putting out a fire. My Mom's parents didn't attend.  They didn't like Dad; he was wild -- drank beer, raced cars and sent a practice grenade to Mom from Korea. They didn't know if it was real or not so they stored it in the chicken coop!


They first met in Ocean City, Maryland. Dad was there with his fiancee and Mom was there with her sister, Millie, who was engaged to my Dad's brother, Marvin.  Dad left his fiancee, what's her name, to swim in the ocean. He spotted his brother and this tall, dark beauty in a red bathing suit. So he went to meet her.  She was Mom, of course. She thought he was crazy, swimming in the ocean with a cigar in his mouth and a staw hat on his head. (But she did think he had very nice legs!)

They next saw each other at Uncle Marvin and Aunt Millie's wedding. Dad asked to drive her home and the rest is history. Sort of...Dad said he was going to marry Mom during that ride back to Mom's parents' house. But their wedding didn't happen for another six years. Mom claims she never did say yes. They married just as their license was about to expire.


This is one of my favorite pictures of Dad taken on his boat somewhere on the Chesapeake Bay. He does love the water -- and anything with a motor.


Mom is the beautiful one in the family, even today. This picture was taken just after she had her long hair cut. Dad said he was glad she did it. Apparently, she used to put it in a big braid when she went to bed. That braid would hit Dad during the night and wake him up every time she rolled over.

Great marriages are made of memories. Mom and Dad's marriage produced a family that loves each other deeply and holds on tightly to those memories.
Posted by Schalene Dagutis at 5:21 AM