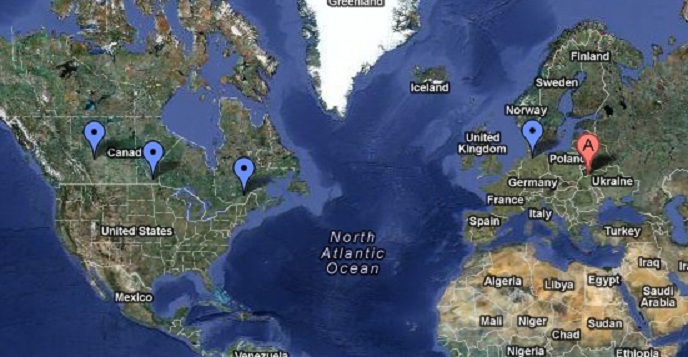 Would you move from the Volhynia area of Russia, which is now in Ukraine (red A arrow), to Alberta, Canada (blue arrow to the far left of the map)? My mother's grandfather and his family did. They sold all their possessions; drove their wagon to Hamburg, Germany; got on a ship to Quebec, Canada; took the Canadian Pacific Railroad to Winnipeg; and bought horses and another wagon and went west to Leduc, Alberta, where they bought a section of land from the railroad. It was a  journey that covered nearly 5,000 miles.

They left farms like these in the Volhynia province:

In wagons not all that much different from this (except maybe the tires):


They arrived in Quebec, Canada:


Then boarded a Canadian Pacific train to Winnipeg:


To buy sections of land in the wide open plains of Alberta:


They built sod houses such as this one until the land was cleared, planted and the first harvest was ready for market. During the winter, they lived off of turnips and rabbits they shot on their land.

If you made enough money from your crops, you could start to build a more permanent wood house.  In a future post, I'll explain why they did it -- and all that European history I've read over the years has finally come in handy.
Posted by Schalene Dagutis at 8:54 AM