There are poets in my family tree, but I will be the first to admit reading poetry is not at the top of my bucket list. Some poems resonate with me, which I shall not name, because they are distinctly out of style. It's just that I don't love poetry.  However, a favorite movie is Dead Poets Society and I am reminded of some quotes by Robin Williams' character, John Keating:

That sounded like it would have appealed to "poor Natty" Tucker, who had a powerful business and political leader for a father and doctors and lawyers for brothers while Nathaniel Tucker[1] just wanted to write poetry. (I wrote about "Natty" and his most famous poem here.) 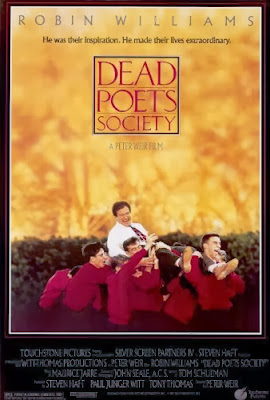 They're not that different from you, are they? ... Full of hormones, just like you.

According to his wife, James Martin Amsberry[2] was full of hormones, too. He wrote a poem about his wife, Lela Ann (Harbert) Amsberry, entitled "My Forest Queen." 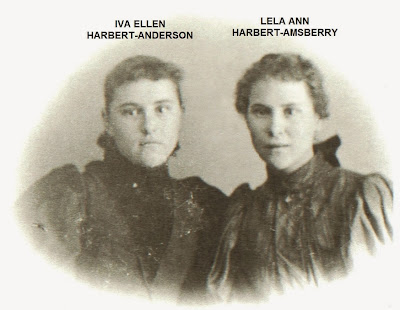 "…the union was severed. She must have come out of that marriage an emotional cripple. She was repelled by the sight of Dad and equated her life with him as a form of slavery thus befalling every married woman. She grouped all the male gender together as having a single-purpose in life, that of 'using' the female counterpart for his pleasures.' The very odious overtones of her remarks scared me for life."

The divorce must have also been devastating for Vivian's father:

"…At the peak of all this distress, one day my Dad disappeared. My sister learned someone had Dad committed to the State Hospital in Salem [Oregon]…He appreciated our visits and never failed to ask about Mama…In his diary was this notation…One thing, if it is the Lord's desire, I hope to be restored to the mother of my children, the wife of my youth."

James Martin Amsberry's wish was not fulfilled in life. But at the death of his ex-wife, Lela Ann, in 1952, she was buried beside James, who died in 1939. And so James got his wish to be reunited with his wife. 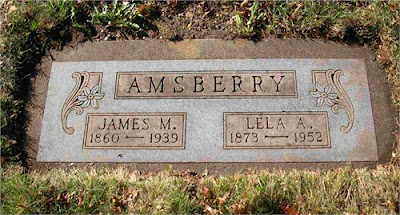 The poets in my family tree may not have created words and ideas that changed the world, but they were each interesting in their own way.

She was schooled among its forests,
Its valleys and its hills,
Her bare feet trod the pebbles
Of the bright and sparkling rills.

In the valley where the bluebird
And the martin sought to nest
In boxes she erected
In the place she loved the best,
Where the cunning gray squirrel chattered
In the white oak trees so tall
Where the top-knot red bird whistled
And the quail sent forth his call.

There she rambled in the wild wood,
Gathering flowers in the spring;
'Mid the beauteous scene of childhood
While the woods with music ring.
Sometimes she sought the babbling brook
Where fish are wont to sport;
With bended pin for fishing hook
She brought the flounder forth.

I knew her in her childhood there
From three years old to ten
Then came out west and stayed four years
Then wandered back again.
I met her in a country store
Upon a wintry day
Her ruddy cheeks appealed to me
'Though aged fourteen, they say.

I visited her parents there --
They followed us out west,
There were my friends and neighbors, too,
I treated them my best --
Two years elapsed -- she is my wife.
A rugged road we've trod.
Two dozen years of life we've seen
Beneath the fatal rod.

Six children came to bless us here
Beneath the circling sun --
It seems to me but yesterday
Since our voyage was begun.
But, if I'm called to leave her here
To tread life's path alone,
I'll not regret the choice I made --
That Fate tus made us one.

She bore the battle bravely'
Was ever brave and true.
In poverty she did her part,
'Tis said of very few.

And now my song is ended.
I will fill the cup of Life,
And drink the health of Lela Ann,
My Faithful loving wife.

_______________
[1] Nathaniel Tucker may be related my sister-in-law. DNA has proved the Georgia Tucker line is not known (at this time) to be related to the Bermuda Tuckers, but people are still trying to sort out which of the three Henry Tuckers in Virginia was the father of Benjamin Tucker (1704-1778), her 6th great grandfather.

NOTE: I ran across references to Vivian Louise (Amsberry) Martin's book, My Mother's Daughter several times in my research.  However, it is out of print but I was able to eventually purchase a copy on eBay. I am indebted to Brian and David Harbert, who wrote Echoes from the Blockhouse: The Thomas Harbert Family Saga. They included excerpts from Vivian's book, which helped answer several mysteries about which my Amsberry research collaborators and I were grappling.
Posted by Schalene Dagutis at 6:04 AM