Do you remember the Disney television show, "Mickey Mouse Clubhouse?"

Robert Wayne Amsberry, my 6th cousin, was a radio personality in Portland, Oregon, during the early 1950s with a daily half-hour show, "Uncle Bob's Squirrel Cage." He was musically inclined, a natural entertainer and had a flair for voice characterizations. A friend of his invited him to come to California and join Disney Studio's music department. He was so enthusiastic about the assignment and did so well performing the songs, that he was invited to join the cast of of the Mickey Mouse Clubhouse show the first season. He was one of the least-known of the three adults in the regular cast. 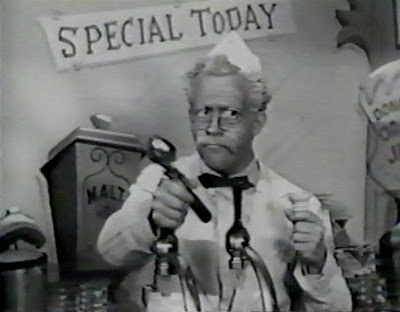 Bob Amsberry in his soda jerk role. Photo courtesy of OriginalMMC.com
Bob described his role on the show as that of a utility infielder. He wrote the skits and many of the songs, handled the guest stars and other acts and performed some of the character parts.  His best songs were considered to be Super Goofy Shuffle, Doin' the Donald Duck Walk, and Dry Gulch Cowboy. During the second season he was the Blue Team leader. Season three was his last season on the show as his work didn't find much favor with Walt Disney.
After leaving the show in 1957, Bob moved back to Portland. On November 10th of that same year, he was killed in a single car accident at the age of 29, leaving a wife and two children behind. 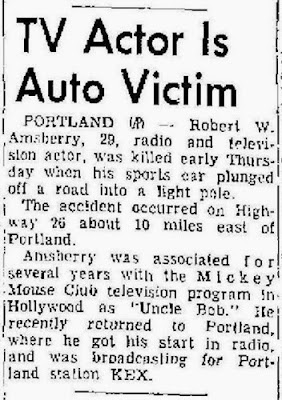