Randall Wilson Breedlove was my 5th cousin once removed. He died in 2008 at the age of 87. I just discovered our connection a month or so ago. Randall was a member of our "Greatest Generation" and had a hard war. He was a private first class with the 88th Infantry Division. He was drafted on October 6, 1943 and went overseas in March 1944, spending a few weeks in North Africa before the invasion of Italy began. 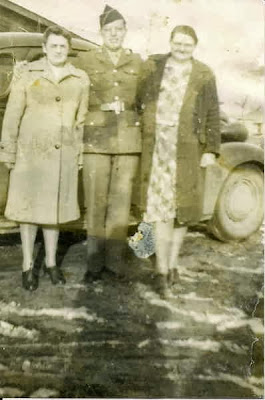 Today is the 69th anniversary of his being taken prisoner of war in Italy. He was transported to Germany and imprisoned in Stalag 7-A. The camp was liberated on May 2, 1945. By the beginning of June, Randall was returning to the U.S. and his young wife and infant son.

He described his capture in an article his hometown newspaper wrote about his return on June 12th:

"We were making a roadblock to keep the Germans from getting through on hill in the north when the Jerries outnumbered us. Being Americans, though, we certainly weren't going to let them take us without our fist putting up a good fight, but they were just too many for us. We were disarmed and marched in the pouring rain to a German observation post where they relieved us of our raincoats. Then we were questioned by German officers. They wanted to know all about our movements, our plans, how many men there were in the whole outfit, and how much equipment we had; but we didn't tell them a thing. They soon found it was useless to try to force anything out of us. 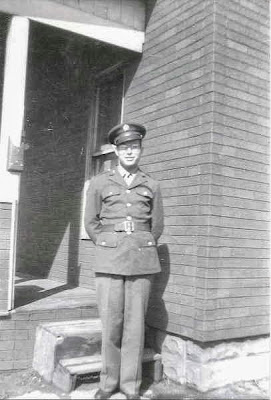 We were marched up the main highway and then shoved into trucks to Mantavia where we were put in box cars, like cattle, for the trip to Mooseburg, the journey taking three days and nights through the Alps. Our next stop was Stalag 7-A.

There were always guards with ready rifle butts close by. Sometimes they hit the poor fellows that were too weak to work. They hit them any place they could -- on the head, across the back, they didn't care. Not long before we were liberated we were served grass soup, yes that's what it was, and our ration of bread that tasted like sawdust. In all the six months we were prisoners we never had clean clothing. We wore the same shirt, pants and underwear and were pestered by lice. 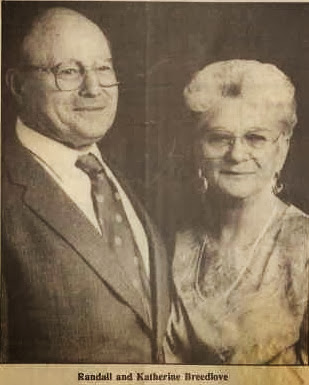 Randall and his wife, Elizabeth, celebrating their 50th wedding anniversary.

On May 2nd, I was working in the kitchen when the first American scout came up the street. We were liberated that day by the 14th Armored Division. Well, you can probably guess the excitement that followed."

Randall Wilson Breedlove was one of the lucky ones. He returned home to his wife young son. He and Elizabeth had three more children during the course of their marriage.
Posted by Schalene Dagutis at 4:00 AM