The Killing of Abolitionist Lovejoy

Illinois entered the union as a free state in 1818. However, that didn't mean that every citizen of Illinois was anti slavery.

A resident of Madison County, Illinois, was Elijah Parish Lovejoy. After his strident editorials denouncing public wrongs made him many enemies in St. Louis, Missouri, he moved to Alton, Illinois and began publishing the Alton Observer. A committee, whose members included a gubernatorial candidate and the state's attorney general, ruled that while Mr. Lovejoy had the right to promulgate anti-slavery views, it was not expedient that he should do so. In order to promote peace and harmony in the city he should sever his connection with the paper. 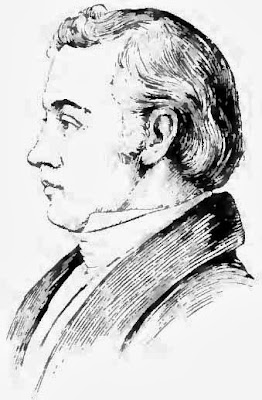 Mr. Lovejoy spoke in opposition to the resolution and made quite a speech:

"What infraction of the law have I been guilty of? When and where have I published anything injurious to the reputation of Alton? Have I not, on the contrary, labored to promote the best interests of Alton? What is my offence? If I have been guilty, you can easily convict me. You have public sentiment in your favor. You have your juries and you have your attorney and I have no doubt you can convict me, but if I have been guilty of no violation of the law, why am I hunted up and down perpetually as a partridge upon the mountain? Why am I threatened with the tar barrel? Why am I waylaid from day to day and from night to night, and my life put in jeopardy at every hour? This is the question: Whether my property shall be protected; whether I shall be suffered to go home to my family at night without being assailed and threatened with tar and feathers and assassination; whether my afflicted wife, whose life has been in jeopardy from continued alarms and excitements, shall, night after night, be driven from a sick bed into the garret to save her life from the brickbats and violence of the mob. That, Sir, is the question.

Sir, I dare not flee away from Alton. Should I attempt it I should feel that the angel of the Lord with his flaming sword was pursuing me wherever I went. It is because I fear God that I am not afraid of all who oppose me in this city. No, Sir, the contest has commenced here and here it must be finished. Before God and you all, I here pledge myself to continue it, if need be till death. If I fall my grave shall be made in Alton."


Alton was a center for slave catchers recapturing escaped slaves and had largely been settled by Southerners. Sentiment was against him. A mob surrounded the warehouse where Lovejoy had hidden his printing press and fired into the building. Lovejoy's supporters returned fire and killed a man. The mob sent a boy up a ladder to set fire to the roof of the warehouse. Lovejoy tried to push the ladder away from the building and was shot and killed. 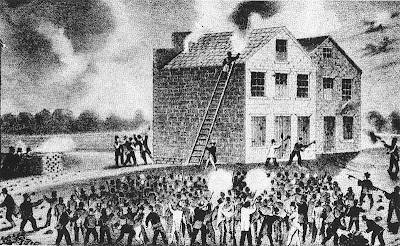 Wood engraving of the pro-slavery setting fire to the warehouse where Lovejoy's printing press was hidden; courtesy of Wikipedia.

Lovejoy became a martyr for the abolition movement. The Centennial History of Madison County, published in 1911 had this to say about the tragedy:


"The most far-reaching event in the history of Madison County, the one of greatest national importance, was the tragedy of the killing of Elijah Lovejoy, by a pro-slavery mob in the city of Alton on the night of 7 November 1837. The horror that untoward event inspired throughout the country advanced the anti-slavery cause, it is safe to say, at least a generation. It inspired the eloquence of Wendell Phillips and lighted a flame of indignation over the land."

Lovejoy was the most prominent abolitionist in the county but he wasn't the only one or even the first.  My four times great grandfather, one of the co-founders of Troy, Illinois was a founding member of the Madison Association to oppose the introduction of slavery in Illinois. The association was formed in 1823. 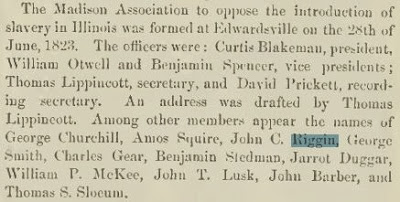 From the Centennial History of Madison County. John C. Riggin 4 times great grandfather.
Posted by Schalene Dagutis at 9:22 AM