Out of Africa: The Kikuyu

My Aunt Joan was born in Kijabe, British East Africa (now Kenya), in 1921. Her father was a missionary for the Church God and the family lived in there from 1920 until 1929.  Joan's brothers -- Maxwell and Homer -- wrote journals about their lives.  Homer's journal includes many descriptions of life in Africa.

The Kikuyu folks we found to be most friendly. As to the language, we did not know a word at first.  Soon we knew the greeting, "Wemuwega." People were pleased to help us, often were amused, laughing as we stumbled about strange words. The Kikuyu didn't have a daily newspaper; it was "Waiguatia?" Just a few words later and you had communicated the latest news.

We were surprised to see them bearing great burdens on their backs. Wide, wide rawhide thongs tied about the load passed over the head and leaning under that load they carried produce from garden to home or home to market. Women will carry larges vessels on their heads. 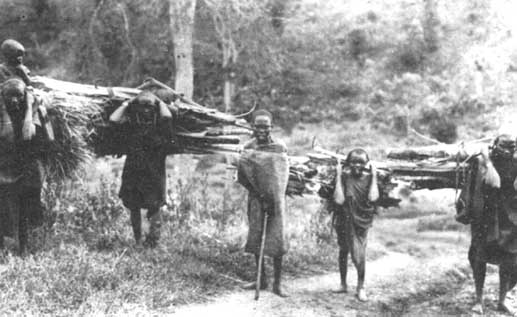 Kikuyu men carrying bundles of wood.  Photo courtesy of the Food and Agriculture Organization of the United Nations 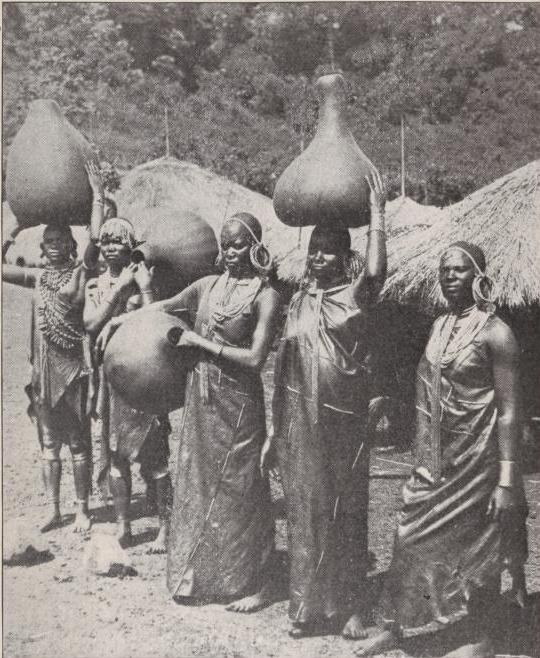 Well-worked skins formed the major part of a woman's attire. Men wore them as well but many were wrapped in blankets. The children wore smaller skins, a baby goat's skin for example. Many of the skins were well saturated with castor bean oil mixed with a reddish pigment. The oil made the skins somewhat waterproof, but the pigment seemed to rub off on other objects, turning them bright red.

In those days it was common to see their hair shaved close, leaving a circle at the top of the head. The Kikuyu wore bracelets, beads, and rings. The bigger the better. Most ears were pierced, the lobes being stretched to quite long lengths. 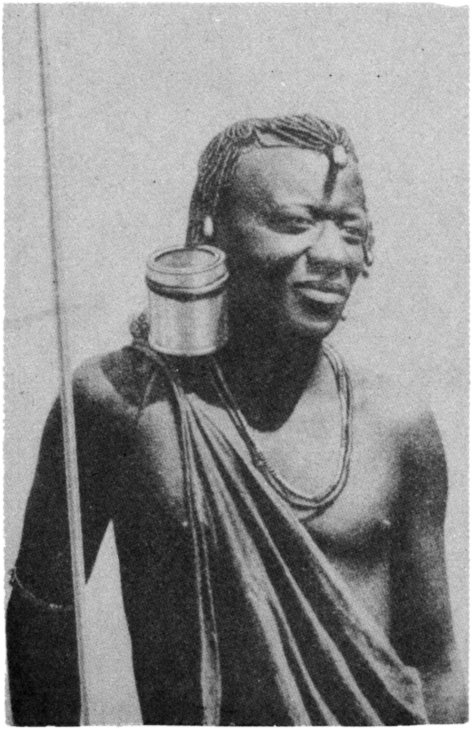 The Kikuyu stretched their ear lobes with weights and jam pots

I believe in order to avoid contagion a very ill person was taken out to the edge of the wilderness, left there with food, fire, and fire wood.  Seemingly no one stayed with them. If the fire was kept brightly lit, the hyena would stay away. It was evident some did not make it as their bones would be visible in the forest. With the advent of the medical mission, as well as government doctors, some of the old dangers diminished as well as the customs.

The Kikuyu were hard working, frugal, and progressive. Often in the early days the small herds of goats or sheep spent the night within the hut with the family for the leopard was a danger.