During the Bailey family's journey to British East Africa, now Kenya, they stopped in the Middle East and toured the area for three weeks. During that time, they got caught up in the Franco-Syrian War. You may read about their outbound trip here and here.(1)

Immediately after World War I, the British occupied Damascus, Syria. With Britain's permission, the ruler of the Hashemite people, Faisal, declared the establishment of an Arab constitutional government. Later during talks between the victorious allies, France reminded Britain of their 1916 Skyes-Picot Agreement, which essentially divided the remains of the Ottoman Empire between the two countries. The area that included Syria was located in the French mandate and they wanted it back. France then established a military administration in the Levant. 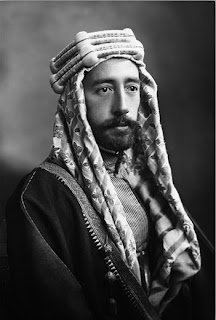 Faisal I, King of Syria

At the same time, Syrian nationalist feelings were rising and the first national conference was held in 1919. Several nationalist societies advocated independence as a constitutional monarchy with Hashemite ruler, Faisal, as king. The nationalists looked to Britain and the United States for help, but Britain pulled out of the country and signaled an end to its involvement in Syria.

In 1920 Faisal was forced into negotiations with France, which his vehemently anti-French supporters opposed. French forces were sporadically attacked and the Syrian Congress reconvened and declared an independent Arab Kingdom of Syria with Faisal as king and Hashim al-Atassi as prime minister. The British and the French repudiated the new kingdom and the League of Nations met to reinforce the French mandate.

Several violent incidents occurred, initiated by Arab militias, which strengthened world feelings against the Syrians. Faisal surrendered in July 1920 and disbanded the troops but his defense minister did not. Yusuf al-'Azma raised a small body of fighters. He led them to Maysalun where they were resoundingly defeated by the French. Yusuf al'Azma was killed during the battle. 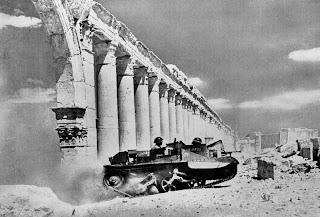 French troops in action during the Franco-Syrian War

French general Henri Gourand established a civil administration for Syria and divided the country into six states. The state of Greater Lebanon later became the modern country of Lebanon. 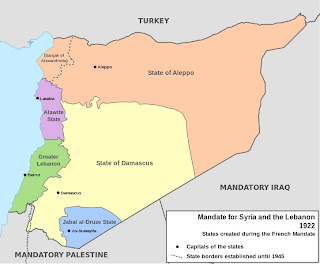 French Mandate for Syria, 1922
You'll remember Homer Bailey described his family "running into" this war in 1920 on their way to Kenya:
We walked many miles the day we went to Nazareth. There was war then. Heavy gun fire could be heard in the distance. Traffic was almost non-existent. A military truck came along and gave us a lift. We were taken across the Sea of Galilee in the commander's motor launch. Due to the general unrest in the area, he urged us to spend the night in his military camp. So we had a tent, camp beds, and all the comforts of home.
_______________
(1) You may read about the Bailey family's trip home from Kenya in 1929 here.﻿
Posted by Schalene Dagutis at 5:34 AM