Honoring those Who Died in the Service of Their Countries

In observance of Memorial Day and the centenary of World War I, I would like to honor my ancestors who died in the service of their countries during the Great War or the War to End All Wars. I have several more ancestors who served in the war, but at this time I know two of them died on foreign soil.

Julius was the step-son of my great great grandmother Clementine Wells. He was born on 1 August 1888 in Troy, Illinois to William and Ida May (McMakin) Collins. His father had immigrated to the U.S. from England with his parents as a young boy. When Julius registered for the draft in 1917 he was 28 years old, lived in St. Louis and owned a gift and art shop. He married Edith Audrey Wolf in July 1918. Three months later, he was dead in the forests of Argonne, France. Before he left to fight in Europe, he wrote A Soldier Boy's Creed, which was published in several newspapers in the midwest, including his hometown paper, the Troy Call.

Julius' remains were buried in the Troy City Cemetery. His father had been killed by a fall of slate in a coal mine just the year before. To date, I have been unable to trace Julius' wife, Edith Audrey Wolf. 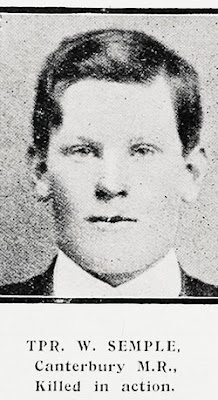 
William was my second cousin three times removed. He was born on 10 Apr 1896 in New Zealand to Alexander and Alice (Thompson) Semple. He was the grandson of Scottish immigrants. At the age of  19, he was killed in Gallipoli, Turkey, on 8 May 1915. Only two weeks earlier, thousands of young men stormed the beaches on the Gallipoli peninsula. At the end of the eight-month campaign 2,779 New Zealanders had been killed, about a fifth of the total who fought on Gallipoli. Australians and New Zealanders celebrated ANZAC Day last month. One of my Worldwide Genealogy -- A Genealogical Collaboration bloggers wrote a wonderful post (Australian perspective) commemorating the day.

William was buried in Turkey at the Twelve Tree Copse Cemetery. The cemetery was created after the armistice when graves were brought to the site from isolated sites and small burial grounds on the battlefields. The cemetery also contains the Twelve Tree Copse (New Zealand Memorial), one of four memorials erected to commemorate unknown New Zealand soldiers. In 2000 my Semple research collaborator, and fourth cousin once removed was privileged to attend a sunrise service at the memorial in honor of her grand uncle, William.