Wreck of the Steamship Pulaski

Sarah Virginia Bryan, daughter of Joseph and Delia (Forman) Bryan, is the sister-in-law of my sister-in-law's fifth cousin, four times removed. Sarah married William Mein Mackay in 1835. They had two children Delila, born in 1835, and William, born in 1838. William and Sarah lived in Savannah, Georgia, where William owned two plantations along the Savannah River -- New Hope and Causton's Bluff. These properties were given to him in 1837 by a cousin, Mary Anne Cowper.

On 14 Jun 1838 the steamboat Pulaski left Charleston, South Carolina, bound for Baltimore, Maryland. On board were about 150 passengers and 37 crew. Mrs. Mackay had boarded the Pulaski in Savannah, along with her two children and a servant. About 11:00 p.m., off the coast of North Carolina, the starboard boiler exploded and the ship sunk about 45 minutes after the explosion. Mrs. Rebecca (Lamar) McLeod, a survivor, believed only 54 people survived. Mrs. Sarah Virginia (Bryan) Mackay and her two children were not among them. Upon hearing the news of his family's death, William Mackay moved into his mother's house and remained in seclusion until his death in 1859. 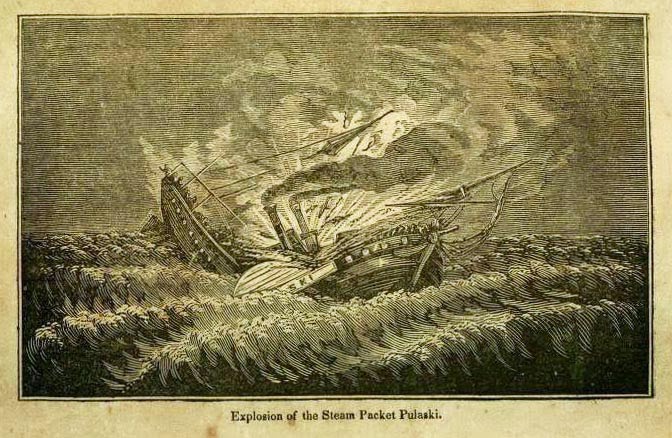 From Steamboat Disasters and Railroad Accidents in the United States by S. A. Howland

"Mrs M. was lost in the wreck of the steam Pulaski, June 14, 1838. The testimony of a survivor in that awful scene leaves us mournful joy in her recollection. Her pious mind and noble heart stood firm amid the horrors that surrounded her. Gathering her infants in her arms she awaited the stroke of fate, and met it with all a Christian's resignation, and a Christian's hopes. 'Of such is the Kingdom of Heaven.' Hers was in truth a noble mind and noble heart. She was of short stature, but of spirited and engaging appearance. She received the Holy Communion the Sunday before sailing in the ill-fated steamer, but she had been for some years a consistent member of the Protestant Episcopal Church."

The Wilmington Advertiser published a firsthand account of the disaster as told by Mr. Hibbard, the first mate, on 18 June 1838:

"Mr. Hibbard states that about 10 o'clock at night he was called to the command of the boat, and that he was pacing the promenade deck in front of the steerage house; that he found him. If, shortly after, upon the main deck, lying between the mast and side of the boat; that upon the return of consciousness, he had a confused idea of having heard an explosion, something like that of gunpowder immediately before he discovered himself in his then situation. He was induced, therefore to raise and walk aft, where he discovered that the boat midships was blown entirely to pieces that the head of the starboard boiler was blown out, and the top torn open; that the timbers and plank on the starboard were forced asunder and that the boat took in water whenever she rolled in that direction.

He became immediately aware of the horrors of their situation, and the danger of letting the passengers know that the boat was sinking, before lowering the small boats. He proceeded, therefore, to do this. Upon dropping the boat, he was asked his object, and he replied that it was to pass round the steamer to ascertain her condition. Before doing this, however, he took in a couple of men. He ordered the other boats to be lowered, and two were shortly put into the water, but they leaked so much in consequence of their long exposure to the sun, that one of them sunk, after a fruitless attempt to bail her. He had in the interim taken several from the water, until the number of ten. In the other boat afloat there were eleven. While they were making a fruitless attempt to bail the small boat, the Pulaski went down with a crash, in about 45 minutes after the explosion.

Both boats now insisted upon Mr. Hibbard's directing their course to the shore, but he resisted their remonstrances, replying that he would not abandon the spot till day light. At about three o'clock in the morning they started amidst of the wailing of the hopeless beings who were floating around in every direction, upon pieces of the wreck, to seek land, which was about thirty miles distant. After pulling about thirteen hours, the persons in both boats became tired, and insisted that Mr. Hibbard should land. This he opposed, thinking it safest to proceed along the coast, and to enter some of its numerous inlets; but he was at length forced to yield to the general desire, and to attempt a landing upon the beach a little east of Stump Inlet.

He advised, Mr. Cooper, of Ga., who had command of the other boat, and a couple of ladies with two children under his charge, to wait until his boat had first landed, as he apprehended much danger in the attempt, and should they succeed they might assist him and the ladies and children. There were eleven persons in the mate's boat, (having taken two black women from Mr. Coopers'.) Of these, two passengers, one of the crew, and the two negro women were drowned, and six gained the shore. After waiting for a signal, which he received from the mate, Mr. Cooper and his companions landed in about three hours after the first boat, in safety. They then proceeded a short distance across Stump Ground, to Mr. Redd's of Onslow County, where they remained from Friday evening until Sunday morning, and then started for Wilmington. The mate and two passengers reached here this morning about 9 o'clock." 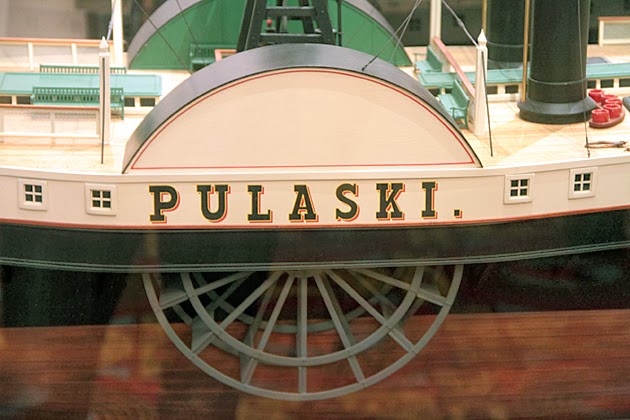 Model of the Steamboat Pulaski from the e-book, "For 91 Days in Savannah," by Michael Powell and Jurgen Horn.

For more information about the explosion of the Pulaski, some good research has been done by Judi Heit and Stu Beitler.
Posted by Schalene Dagutis at 5:10 AM