Obama and My 6th Cousin

Kermit John Jackson lived in Hawaii before and after it became a state. He was born on December 19, 1902 in Custer County, Nebraska, and died May 12, 1992 in Honolulu, Hawaii. He attended the State Teachers College at Kearney, Nebraska, graduating with a degree in business. In 1926, he accepted a teaching and coaching position in LaRue, Ohio. The next year he relocated to Long Beach, California, and worked in the oil fields. In 1928, he began teaching in the Territory of Hawaii.

He married Corene Schroeder. She grew up in Bertha, Minnesota, and graduated from the University of Minnesota in 1929. She, too, accepted a teaching position in Hawaii, met and married Kermit Jackson in 1933. Kermit and Corene had two sons: Kermit Ian born July 7, 1936, and James Keith born August 7, 1944. Kermit and James are my sixth cousins. 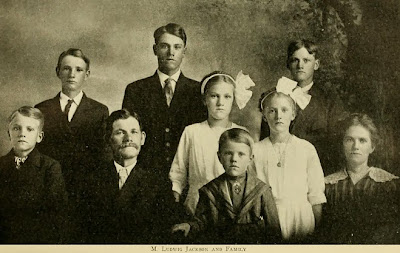 Kermit is the tallest son in the back row, photo courtesy of an Ancestry.com member

In 1952, a young woman named, Irene Beard, wrote a book entitled History of Adam Beard and His Descendants. At that time Kermit was still teaching school in Hawaii and his oldest son, also named Kermit, was attending the Punahou Academy in Honolulu.  President Barack Obama graduated from Punahou School in 1979! 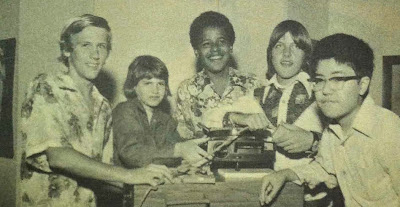 The school was founded in 1841 and built on the lands of the Ka Punahou, named for the fabled natural spring. The spring still flows today through the heart of the campus under the Thurston Memorial Chapel. The school was developed to provide a quality education for the children of Congregational missionaries, allowing them to stay in the Hawaii with their families rather than having to be sent away for schooling. 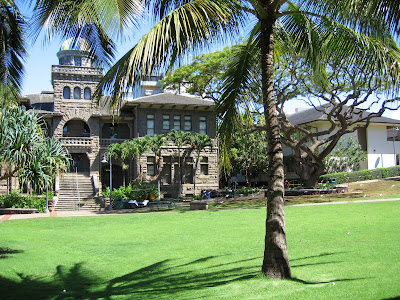 Photo by Michael Morgan courtesy of the Punahou School
Posted by Schalene Dagutis at 6:14 AM