The Matanuska Colonization Project was part of Franklin Roosevelt's New Deal, a series of programs to help the country recover from the Great Depression. It was not the only rural rehabilitation colony, but opinions about Matanuska were greatly divided. It brought praise from some for helping people rebuild their lives and condemnation from others for being a waste of money and dangerous social experiment. 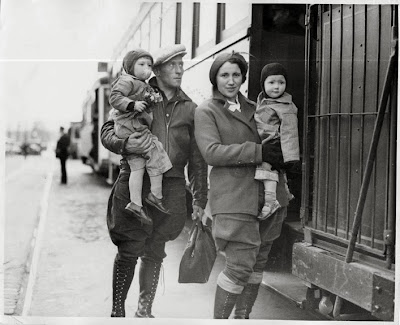 Matanuska colonists from Wisconsin waiting to board the train that will take them to Alaska. Photo courtesy of Wisconsin Public Television

People from the states of Minnesota, Michigan and Wisconsin were chosen for the Alaska project because the temperatures were most similar. Local aid workers were given loose guidelines for for selecting candidates:

"As far as possible, families should be selected first on their farming ability and secondly, those who may have secondary skills and who may adjust themselves to a diversified farming activity and can assist with carpentry on their homes and then those who may know something about machinery and blacksmithing and who have leadership qualities."

The Matanuska Valley was chosen as the location with the new town of Palmer as the base of operations. The town had been established in 1916 when the railroad was built to the coal mines at Chickaloon. At the time only a hundred families lived in the valley. The Federal Emergency Relief Administration (FERA) set aside 260,000 acres for the new colony. 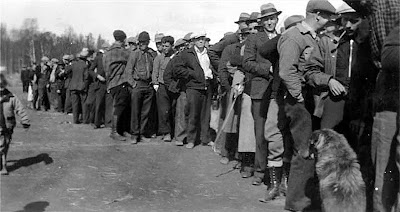 Settlers waiting in line for the first land drawing. Photo courtesy of www.Alaskaweb.org

The first contingent of settlers arrived from Minnesota in on May 10, 1935. In the beginning things did not go well. Perishable food was shipped without refrigeration and could not be eaten. School desks arrived before the construction materials needed to build the school. But slowly things began to improve. The government designed five different house plans that could be frame construction or built out of logs. There were no options for barns. Many of the early settlers did not know how to build structures and had to take partially finished buildings down and start over.

So was the project successful? Out of the original 203 families who entered the first drawing for land in 1935 only half remained five years later. But in August 1935, a few months after the first colonists arrived, 903 people were working and earning a salary. But by 1965 only 20 of the original families were still farming in the valley.  The project cost $5 million and 60 percent of the cost was for public works projects.

Kathreen Estelle Gibson and her first husband, William Hecker, and their six children were not among the first colonist living in Palmer, Alaska. But the family was there by 1938 and Kathreen remained in the Matanuska Valley all her life and was considered one of the its pioneers. I wrote about Kathreen here. 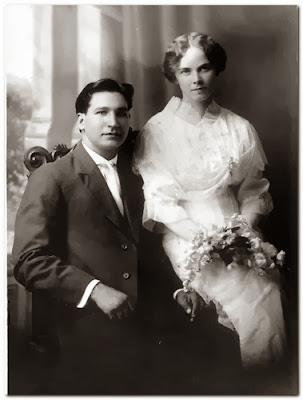 To learn more about the Matanuska Colonization Project, a very good program is available from Amazon.com for viewing.
Posted by Schalene Dagutis at 5:23 AM

Email ThisBlogThis!Share to TwitterShare to FacebookShare to Pinterest
Labels: Alaska