Archie Connett in His Own Words: Part I -- The Crime

Archie Connett was released from prison on July 1, 1968 after serving 15 years for murdering his three children and attempting to murder his estranged wife. He was released from parole two years later and was a free man.  After prison he founded Ex-Offenders Resources, Inc., to influence the ex-offender community to contribute to society. He co-authored at least two books, including "Paroled but Not Free: Ex-offenders Look at What They Need to Make It Outside,"  which was published in 1973. In the epilogue of this book, Connett describes what happened on December 23, 1952 and his life after that.

This is Archie Connett in his own words:

"On December 23, 1952, after a year of estrangement from my wife -- in a moment of madness -- I took the lives of my three small children and almost destroyed my wife and myself.

My wife and children were my little world. When my wife withdrew her love and affection, when she rejected me again and again, my mind and energy over the months, night and day, were bent on getting her back. When, after attempting to please her, waiting, arguing with her, when my wife said things to me I could not stand to hear, and struck me -- when this happened, I felt cut off with terrible finality, violated, betrayed, almost inundated with terror. I could no longer contain myself. It was as though something burst deep inside me. I felt impelled to destroy and did.

While I was attacking my wife, the children came screaming out of their bedroom, and my violence was transferred from her to them. It was all over in a few seconds. The explosion into violence, the manner and means of it, what I did to myself afterwards (cut both wrists to the bone and severed my esophagus with a razor blade) -- these were not the actions of a sane man.  Emotional upheaval had transported me beyond a focus of awareness that included rational decision.

If the ambulance had arrived a few minutes later, I would not be here. At the county hospital a team of surgeons worked hours to save my life and repair the damage done.

For five days, I was given private nursing care around the clock. I could do nothing for myself. My hands and forearms were bound on boards to protect my wounded wrists. A tracheotomy had been done to permit me to breathe. Only my mother was permitted to visit me. I felt strange and frightened. Every time I opened my eyes, a nurse was there looking at me, waiting to care for me. I began to mend, to want to live. 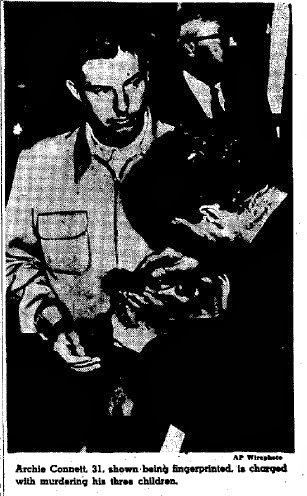 Archie Connett being fingerprinted. Photograph was published in the Oakland Tribune on January 13, 1953

After five days, I was arraigned in Municipal Court and taken by the sheriff and two of his deputies to San Quentin for safekeeping. The authorities at San Quentin, I was told, would be able to provide medical care and protection not available in the county jail.

My first night in San Quentin was spent in an observation room in the "psych" ward on the third floor of the hospital. A naked bulb above the bed burned brightly through the night. It was terribly hot. Frequently, screams shattered the stillness. Mutterings, ramblings and obscenities startled me from an uneasy sleep. Every few minutes an eye would appear at the peephole in the iron door. 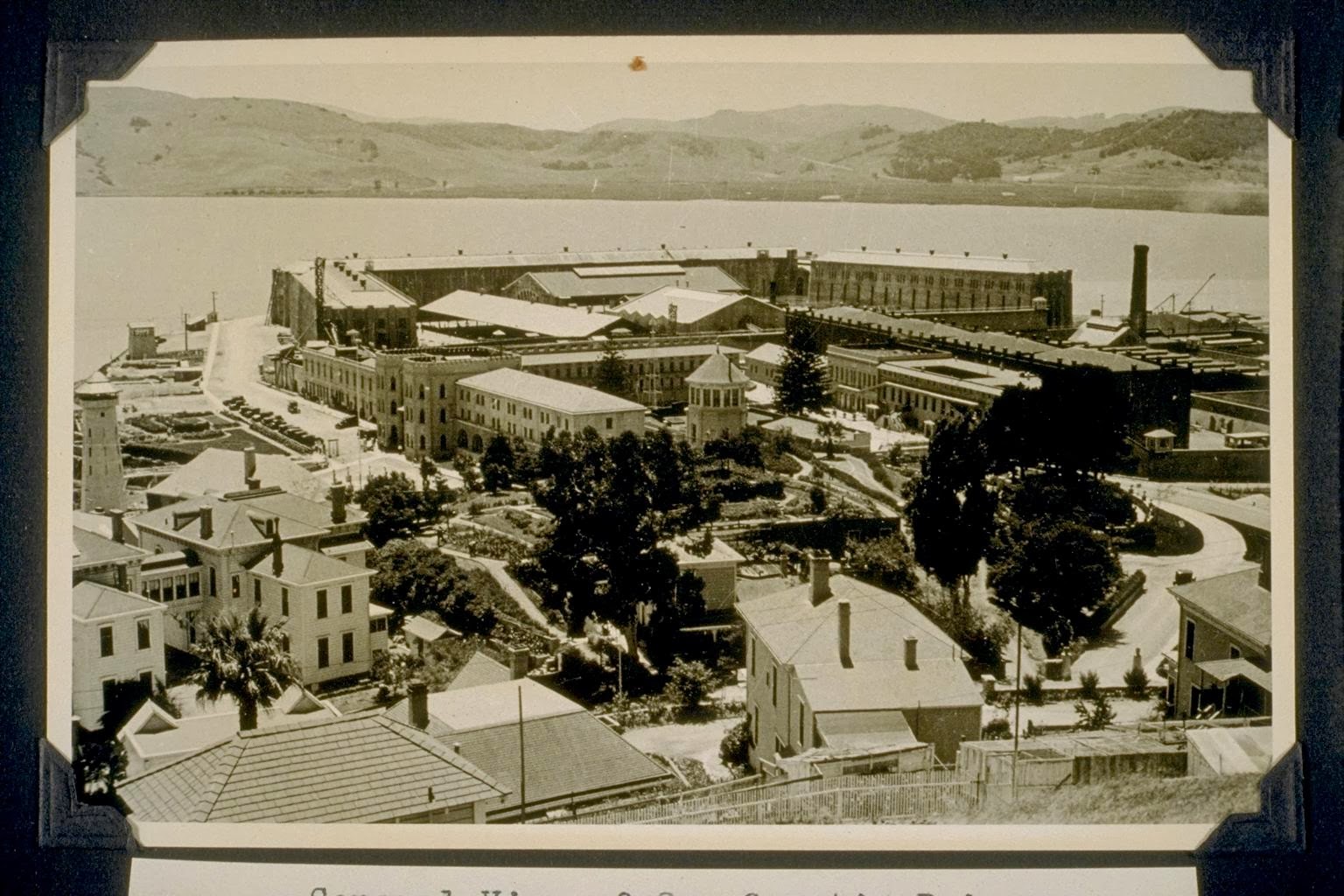 San Quentin Prison circa 1935. Photograph courtesy of the Online Archives of California

The next morning, wearing only blue coveralls and felt slippers, shivering in the frosty January air, I was taken across the Big Yard, to the North Block, then up in the elevator to Death Row.

On the row, I was told I would receive the best care available in the prison. A doctor would see me daily. I would have privacy. I was placed in a cell -- a few doors down from Caryl Chessman.(1)

On Death Row, you are locked behind massive stone and steel walls, behind a steel cage that encloses the row, behind the steel-barred door of your cell. A naked 40-watt light globe burns 24 hours a day. The bull -- the armed guard -- on the gunrail looks down on you. The truth of your predicament hangs over you; fear crawls through you. 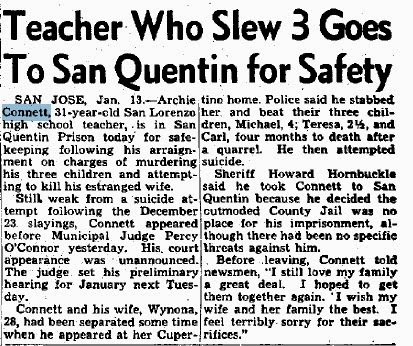 Article from the January 13, edition of the Oakland Tribune

For several weeks I was behind the bars of my cell until my mother retained a lawyer who had me transferred to the county jail, a 102-yeard-old structure in which a corridor ran around a small cell block.

Each day I was allowed to walk in the corridor, but at night I was locked in a small cell with three other men behind the solid iron door -- solid save for a peephole. In the cell was the usual naked 40-watt light globe, two double-decker beds, and a 5-gallon can (honey bucket). Outside, men lined the corridor floor, trying to sleep -- coughing, hacking, spitting. All day long and a good part of the night, music and announcements blared forth from a squawky overhead loudspeaker. During the day, the population moved restlessly around the tank, talked incessantly, gambled. There were fights and attempted suicides.

_______________
(1) Carl Chesman was a convicted robber and rapist who gained fame on California's Death Row. He became a cause celebre for the movement to ban capital punishment. He was executed on May 2, 1960.

NOTE: To read the front page story that was published in the Oakland Tribune the day after the murders on December 24, 1952, click here and here.
Posted by Schalene Dagutis at 6:17 AM