Out of Africa: The Eland Hunt

When the Bailey family lived in British East Africa, now Kenya, they hunted game, not for sport but to put food on the mission table. Homer, my aunt Joan's brother, wrote about hunting in his journal. This is the story about hunting elands, Africa's largest antelope. Grown bulls stand close to six feet tall.

Late one afternoon a man and a youth rode into the wilds hunting eland. Should you finally off in the distance spot a big bull eland, that would be a great thrill. You realize full well it will be hard to get within firing range unnoticed. So as to get this good eland meat, great care must be taken in the approach. Just snap a dry twig or in some other way be careless and the opportunity will swiftly disappear and all your effort will have been lost. Should you stalk it successfully, and should you drop it, taking it home remains a rather tall task.

On this day, father and I had searched for hours when late in the evening high on the plateau ahead we caught sight of some of these beautiful antelope. Very carefully we worked our way from the ravine to plateau to gully to clump of trees until we finally came into shooting range. It was quite a bit after the initial sighting until the Dad's gun was fired. After the shot we rushed to the prize. The bull eland had fallen close among a clump of those flat-topped thorny trees. 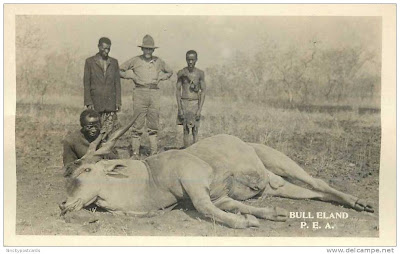 Darkness was now fast approaching. We were a long way from home with a sizable task before us. One of us must go for help for how else could we move this load without pack animals? One of must stay so as to stand guard -- remember, there were hungry meat-eating animals nearby. I was the one to stay.

Night dropped its curtain over the plateau and darkness was upon me and the wind rose.  It was not hard to realize that eyes were watching my every move, unfriendly, savage eyes. I became deeply concerned. I knew there was not a single soul within miles. The night was full of frightening noises.

I realized my greatest danger was being by that beast there on the ground. Though the thorny trees were quite unfriendly, I climbed up one to sit and clung to some limbs. Lions, they say, do not climb very well. It was certainly safer up there out of their reach. Holding on and waiting I did a lot of thinking. As the long hours wore on I waited. Time has a way of seeming very long when we are all alone. Up there in that old tree, I wept and prayed.

Finally, way off in the distance, a glimmer of light showed quite intermittently. At first I could not be certain, but gradually I knew it was coming nearer. Above the night noises I finally heard voices calling my name.  Soon we were reunited and the long night ended just as we arrived home.