Every once in awhile, when researching your family genealogy, you come across someone you wish you could have met.  A few weeks ago, I "met" Ruth Mildred (Beard) Fuller, my fifth cousin once removed.

Ruth was the middle child of Henry Clay and Anna (Duncan) Beard. Clay was an attorney, prominent local politician and public servant. His daughter, Ruth, was born on April 6, 1907. 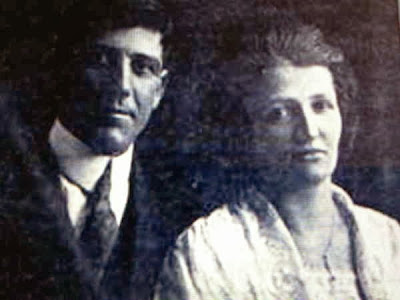 Ruth lived to be 100 years old. She died on January 5, 2008, in Davenport, Iowa. Her obituary appeared in The Daily Iowegian a few days later:

Ruth attended the University of Iowa, Iowa City, which is where she met her future husband, Barney. She was the bookkeeper as well as a partner with her husband in their business established in 1946, Fuller Manufacturing Company of Centerville. They retired to Florida in 1976 where they lived several years in North Ft. Meyers.

Her local memberships include St. Anthony's Catholic Church; PEO. Chapter KU and TTT, Chapter BV. In Centerville she had been a very active member of St. Mary's Catholic Church, PEO. and TTT. She and her husband had also been active in numerous civic affairs in Centerville. She was a member of the Catholic Women's Club and the National Council of Catholic Women since 1928. Ruth was privileged to receive Papal Honors when she was presented the Cross Pro Ecclesia et Pontifice for distinguished service to the Roman Catholic Church.

She was a life long Democrat and was a member of the 1944 Democratic National Convention Delegation Committee to nominate President Roosevelt.

Ruth was an adventurous woman, she was the first woman pilot of Appanoose County and during World War II she served as a Sergeant in the Civil Air Patrol.

She was a lifelong sports fan and in early years she was quite an athlete herself. She and Barney were very generous supporters and fans of the University of Iowa. They always enjoyed following their beloved Hawkeyes in various sporting events.

What a life she led!
Posted by Schalene Dagutis at 7:59 AM