In 1865 the Experimental School for Idiots and Feeble-minded Children opened in Jacksonville, Illinois. According to the asylum's circular, the institution successfully taught "children who were moderately or mildly retarded but not epileptic, insane, or greatly deformed." In 1877 a new Victorian Gothic Revival building was erected on 40 acres of land and the first residents moved into the new facility. In 1910 the institution was renamed the Lincoln State School and Colony. The Commitment Act of 1915 gave responsibility for admissions and discharges to the courts, which could commit anyone who was feebleminded but not insane. As a result, a large influx of people arrived at the school. Some were dangerous. Cook County judges classified juvenile delinquents as "criminal morons," sending them to the school instead of to overcrowded reformatories. In 1937, Smith Cottage was built as a detention building for incorrigible residents. In 1944, two riots broke out in Smith Cottage. 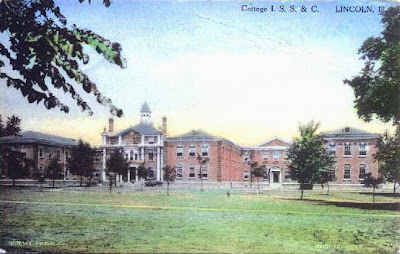 A number of residents were only poor, but if the community in which they lived didn't want to help them, judges could commit them. In 1949 the Mental Deficiency Law gave the power to discharge residents back to superintendents of these facilities. In 1954 the institution's name was changed again to the Lincoln State School and funding was increased for resident care. However, the facility was still severely overcrowded.

In 1973 the Supreme Court ruled residents working in charitable institutions had to be paid like employees. The superintendent of the Lincoln State School ordered an end to the practice of having residents work. By 1975 the institution had undergone another name change and became the Lincoln Development Center. Most of the residents had been moved to smaller institutions, group homes or nursing homes. By 2000 the facility had 383 patients and a staff of 698.

Over the years, the people who were cared for at the school have been called pupils, students, patients, inmates, resident, clients, kids, and boys and girls. Today they are referred to as individuals. However, in 1940, when my  cousin Charles Riggin was there, he was referred on the Census form as an inmate.

For more information on the history of this institution, check out the "Our Times" Winter 2000 issue.
Posted by Schalene Dagutis at 5:21 AM