52 Ancestors #10: She Seemed Rather Fantastic and Extravagant

In honor of Women's History month, I am writing about one of the most colorful women in my family tree this week.

If an ancestor catches my fancy, I like to try and learn as much about their personality as I am able. This has led to a rather large and eclectic collection of books, including This One Mad Act: The Unknown Story of John Wilkes Booth and His Family, by Izola Forrester, an author and screenwriter, who believed her grandfather was John Wilkes Booth. Wouldn't that catch your fancy?

Izola was the wife of my sister-in-law's 8th cousin once removed. Her grandmother was Martha Lizola (Mills) Bellows/Stevenson/Bates (1837-1887). I was sure the book would be loaded with family history gold and colorful characters. My copy of This Mad Act arrived several weeks ago. It's a battered volume, literally falling apart. I had only read up to page 5 when I found this delightful description of Martha Lizola Mills:

"Today she seems rather fantastic and extravagant, but she started off my days with a dramatic curtain rise that has never failed to thrill me when I look back upon it. I loved her for her vital, magnetic personality, and for the way she always dramatized life. She was amazingly queenly and handsome --  not lovely like mother, with reserve and serenity -- but majestic, conveying to a child a sense of power and security. I know that, while she lived, I had a sense of complete safety, a belief that nothing could happen to us under the shadow of her wings. 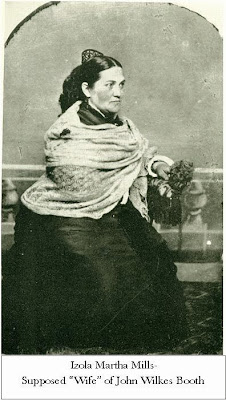 Martha Izola Mills photograph, which was included in This One Mad Act

She was only thirty-nine when I was born, and even in her forties she retained a dark, radiant sort of beauty inherited from her Spanish mother, for whom both she and I were named -- Izola Maria Mendosa, of Cordova, Spain. I remember particularly the picture she made standing on the veranda, watching the carriage turn in from the main road and come up the long curving driveway. Dressed in flowing, beruffled white muslin with wide, lacy sleeves, a red rose beside the Spanish comb she always wore in her heavy, dark hair, she appeared a most romantic person. Her complexion was rich and warmly colored; her eyes were startling because of their flashing, sparkling interest in everything. They were such a surprise, too, from the contrast with her striking brunette hair and skin, changeable in color like the sea -- sometimes grayish blue, sometimes when she was angry a stormy purple black. Today, my sister, Beatrice, really my half-sister, but as dear to me in every way as if we had the same father, has eyes exactly like them."

"She took the place of the aged minister when he was ill, and delivered an extemporaneous Sunday sermon. I remember that day. I had been half asleep beside her in the old wooden pew, waiting for the minister. Suddenly, she rose, swept up the short aisle to the pulpit, and stood there, smiling serenely down at the congregation. I am sure that she enjoyed their surprise, as she told them her intention, dramatizing the occasion with her manner and rich delivery. Perhaps she caught the same thrill of enjoyment, when she held prayer meetings at her home, which she always concluded with refreshments and readings from Shakespeare."

I certainly found my "color" -- descriptions of her appearance and personality! I'm sure there will be future blog posts from this book, including the family's Booth conspiracy theory.

_______________
Martha Lizola Mills was born at Stamford, Fairfield, Connecticut, in 1837 to Abraham Standish and Izola Maria (Mendosa) Mills. Her father was a sea captain. She married first Charles Still Bellows on 30 Jul 1855 at Boston, Suffolk, Massachusetts; second John H Stevenon on 23 Mar 1871; and third, according to her granddaughter, but no documentation has yet been found, Edwin S Bates two or three years before her death. She died in Nov 1887 in Canterbury, Windham, Connecticut and is buried in Plains Cemetery at Windham. She went to her death believing she had been married to John Wilkes Booth, that both her children were his, and he escaped capture at the Garrett farm and died in 1879.

According to Wikipedia, muster rolls indicate Charles Still Bellows was aboard a ship near Montevideo, Uruguay, for the critical time period, making it impossible for him to be the father of Ogarita (Bellows) Henderson, Izola Forrester's mother.
Posted by Schalene Dagutis at 7:03 AM