My father-in-law, Peter Charles Dagutis, was drafted on 7 Apr 1941 and was honorably discharged from the U.S. Army on 18 Jun 1945. He truly earned his membership in the "Greatest Generation." According to his service record, he served with the 5th Infantry Division throughout World War II.  From 1942 to 1944 the division served in Iceland, England, and Northern Ireland. After D-Day the division was attached to Third Army, which was led by General George S. Patton, and served in France, Luxembourg, Germany, Austria and Czechoslovakia. The division earned 5 campaign streamers:

During the night of  22-23 1945 the Fifth Infantry Division made a historic assault crossing of the Rhine River, using assault boats, and crossing without the usual artillery preparation to achieve total surprise. By dawn the 11th and 2nd Infantry regiments were across. Charles B. McDonald describes the German's reaction in the book U.S. Army in World War II, European Theater of Operations, The Last Offensive:

"Soon after dawn twelve German planes strafed and bombed the crossing sites, the first of a series of aerial raids, usually by only one or two planes, that were to persist throughout the day of 23 March. Damage was negligible. Two men in a battalion command post in Oppenheim were wounded and an ammunition truck was set ablaze"

Peter Dagutis was one of the two men wounded by those enemy airplanes. He received a Purple Heart and was back with Company H before too long.


The after action report describes the crossing in detail in the division's unit history. Within 48 hours four U.S. divisions had crossed the Rhine at Oppenheim and were ready to advance into Germany.


Probably the most iconic image of this historic crossing was of General Patton urinating in the Rhine River two days after the successful crossing:


By March 29, the 5th Infantry Division had captured Frankfort. Later they would liberate Mauthausen-Gusen concentration camps and the people of Czechoslovakia, who had lived under Nazi tyranny for 6 years, longer than any other foreign country. The 5th Infantry Division ended the war in Europe 20 miles beyond the Karlovy Vary-Plzen-Ceska Budejovice line where they had been ordered to halt by Eisenhower on 7 May.

Peter Dagutis earned a Bronze Star with Oak Leaf Cluster for his service in Europe:

Staff Sergeant Peter C. Dagutis, 36109224, Infantry, 2nd Infantry Regiment, United States Army. For distinctive service in connection with military operations against the enemy during the period 20 Sep 1944 to 15 Apr 1945 in Europe. On innumerable occasions, Sergeant Dagutis, a squad leader, has voluntarily exposed himself to enemy fire for the safety and protection of his unit. In addition to directing the operation of his squad in Sanry-sur-Neid, he commandeered a weapon and from the speed with which he completed fire missions, was largely responsible for the disruption of a desperate enemy counterattack. His courage, leadership and devotion to duty reflect great credit upon himself and the armed forces. Entered military service from Michigan.

The Oak Leaf Cluster to the Bronze Star Medal is based on the award of the Combat Infantryman Badge. 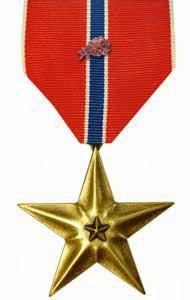 _______________
Peter Charles Dagutis was born on 10 Mar 1918 at West Hazleton, Luzerne, Pennsylvania, to Adam Peter and Cecilia (Klimasansluski) Dagutis. He was drafted into the U.S. Army on 7 April 1941 and served with Company H, 2nd Infantry Regiment, 5th Infantry Division. The division was attached to Patton's Third Army in early August 1944 after arriving in France on 9 July 1944 and participating in Operation Cobra, the breakout of the bocage terrain as part of Omar Bradley's First Army. On V-E day the division was in Czechoslovakia. Peter was honorably discharged on 18 June 1945. Later that summer he married Elizabeth Theresa Fishtahler. They had three children; their only son is my husband.
Posted by Schalene Dagutis at 6:11 AM