I've loved books before I even knew what genealogy was. I love having them on my bookshelves or in a pile beside my bed, but most of all I love reading them. I resisted using an e-reader until every shelf was full and my husband near rebellion. Now that I've become obsessed with genealogy and my family's history, I love old books about the counties in which my ancestors lived. You can discover the most wonderful little factoids and I've blogged about what I've discovered reading old history books before.

I use Google Play to search for old county history books. Recently, I found An Illustrated History of Lincoln County, Nebraska, and Her People, A Narrative of the Past with Special Emphasis Upon the Pioneer Period of the County's History; Particular Attention Also Given to the Social, Commercial, Educational, Religious, and Civic Development of the County from the Early Days to the Present Time, Volume I, edited by Ira L Bare and Will H McDonald, and published in 1920. It included a section entitled "A Platte Valley Tragedy" about the murder of Vernon Andrew Connett on August 2, 1914. 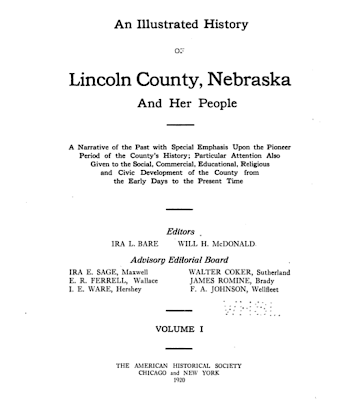 A book of four hundred pages was published in 1915 entitled "A Tragedy of the Platte Valley."[1] This book refers to the most cold-blooded of Vernon Connett in the summer of 1914, by Roy Roberts, who paid the penalty June 4, 1915 by being legally electrocuted within the walls of the prison at Lincoln, Nebraska. There were several strange incidents connected with this murder -- others were charged with aiding in this awful crime -- but the courts found Roberts guilty. He was twenty-two years of age when he committed the crime…The man whose life he took was only twenty-one years old. He was riding with Vernon Connett in the latter's wagon and was supposed to be looking for a place to work. Connett was killed on this trip, his body secreted along the sands of the Platte River in this county, and found in piecemeals [sic] as the evidence showed. The man, Roy Roberts, changed his name and took the team of horses to Hershey where he finally sold them, including wagon and harness. The defendant was arrested on suspicion and finally brought to trial at North Platte before Judge Grimes in January 1915. It was a case of "circumstantial evidence," though quite clearly defined. 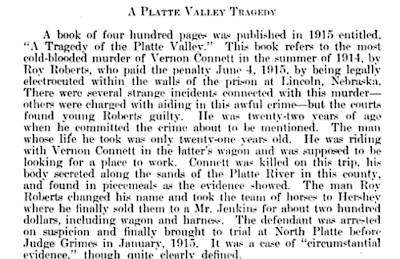 I guess like many modern true crime books rushed to print to take advantage of the headlines, this book contained many errors of fact. Roy Roberts was not electrocuted. He appealed the verdict and was granted another trial. At that trial he was sentenced to a 25-year prison term. The article below explains the reason for his second trial:

From an article published Feburary 6, 1917 in the Nemaha County Herald:

"..The trial attracted so much attention that the crowds became so large that it was necessary to conduct the trial in a theatre. When the case was appealed to the supreme court it was alleged that this had given a sensational setting which had prejudiced the jury. The case was sent back to the district court for a new trial and after witness had been summoned and the jury empaneled Roberts entered a plea of guilty to murder in the second degree and was sentenced to twenty-five years in the penitentiary."

This article appeared in a North Platte newspaper on February 9, 1917:

Body of Connett Buried at Auburn

Nearly two years after the murder of Vernon Connett his body is at its final resting place. After the sentencing of Roy Roberts to 25 years to life in the state penitentiary following his confession, through his plea of guilty to the slaying of Connett, the skull that had been held as the chief exhibit of the state, was released by the sheriff and the body was taken from the morgue where it had been taken from the South Platte River February 15, 1915, and was sent to Auburn, Nebraska for burial. Andrew J Connett and a brother  took charge of the body and placed it on an evening train that bore it eastward toward its resting place. 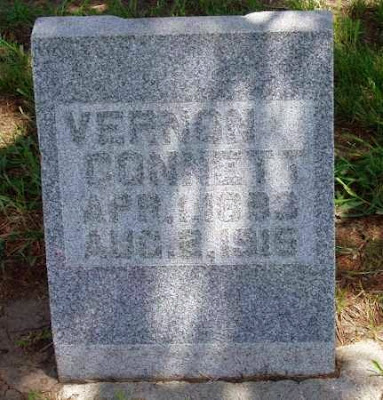 
This is my entry for Amy Johnson Crow's 52 ancestors in 52 weeks challenge.

_______________
Vernon Andrew Connett was born on 1 April 1893 at Woodbury, Grant, Iowa, to Andrew Jackson and Marta Ellen (Gilbert) Connett. He married Lefa Marie Amsberry on 20 May 1913 at St Francis, Cheyenne, Kansas. They had one son, Archie Vernon Connett born on 13 Mar 1914 at Cheyenne County, Kanasas. Roy Roberts murdered Vernon Andrew Connett on 2 August 1914 near North Platte, Lincoln, Nebraska. Vernon's body was found on 15 Feb 1915 buried in the sands of the South Platte River. His body was interred in Sheridan Cemetery at Auburn, Nemaha, Nebraska.

NOTE: The death date on Vernon Connett's headstone is incorrect. He was killed on 2 August 1914.

[1] You bet I looked for A Tragedy of the Platte Valley. An electronic copy was not available online, but I found a used bookseller who had one.  I won't tell you how much I paid for it!
Posted by Schalene Dagutis at 5:54 AM