I attended the Fairfax Genealogical Society's Spring Conference yesterday and today. Yesterday I learned an awful lot about researching the Revolutionary War, military records for the Ohio Indian wars that took place between 1790-1812 and the War of 1812. This morning I chose the track on Scottish records.

Basic information (births, baptisms, marriages, death and burial) records are centralized and located on ScotlandsPeople, but there are a lot more places you can go online to learn more about your ancestors.

Information Tidbits
Our Scottish ancestors followed a convention for naming their children: 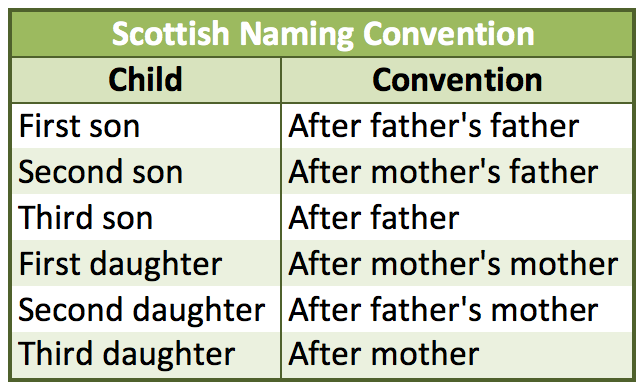 The census in Scotland was taken during one night every ten years.  They listed who was home at the time census was taken. If a person was away from home that night, they were not recorded even though they lived at that address.

If you see "X made his/her mark" on a Scottish record, it doesn't mean your ancestor was illiterate. It only means they could not write in English. Likely they could read and write Gaelic.

Military Records
Regional Databases
Miscellaneous
The Internet Archive has the Scottish Post Office and trade directories online. These are like U.S. city directories.

Local family history web sites for each parish in a county exist online. Typically they have school records and newspapers for the area in addition to other collections particular to that parish.

British Newspaper Archive includes all of the major newspapers but also many of the local newspapers.
Posted by Schalene Dagutis at 1:16 PM