My great grandmother, Clementine Wells Riggin/Collins', step-son served in World War I. Before he went overseas to join the fighting, Julius Franklin Collins wrote "A Soldier Boy's Creed," which was published nationally.

To believe absolutely in my country and her unselfish devotion to the right.

To be confident that those higher up are utilizing every power in their cause.

To realize that the draft is but an urgent call to a higher duty or those found able to serve.

To conduct myself at all times as the trusted representative of a free and great people.

To protect little children and respect all womankind in every thought and action.

To honor my fellow soldier and by loyal to him in every way.

To be a man among men; to shrink from no task assigned to me; and to be in the right place at the right time.

To know that right is might; that truth will win; and that the true God will surely favor and protect those who deserve it and trust in him. 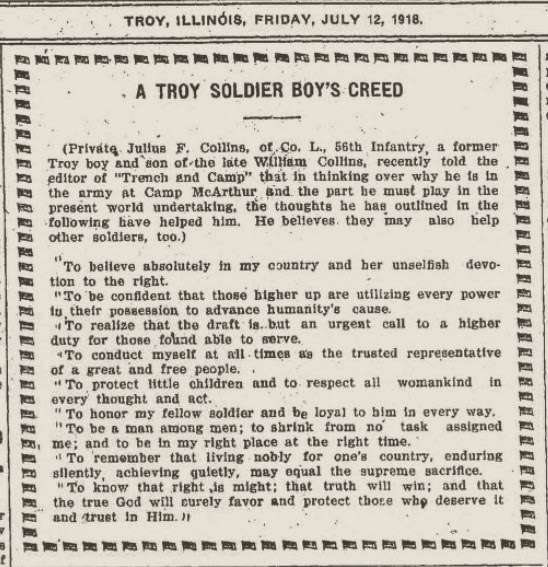 Julius was killed in action on 30 Sep 1918 in Argonne, France during the Meuse-Argonne offensive. He was the first casualty from Troy, Illinois, in World War I. 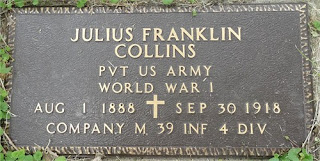 Collins' veteran's grave marker. His remains are buried in the Troy City Cemetery.
Posted by Schalene Dagutis at 6:25 AM