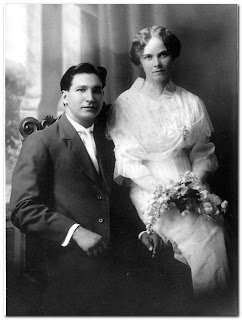 Kathreen Estelle (Gibson) Hecker/Huntley/Glatfelder (1893-1983) -- Kathreen Estelle was born June 28, 1893 in Owosso, Michigan. When Kathreen was 14 years old her father, Elbert W. Gibson, a teacher, was drowned attempting to save the life of one of his students who had fallen through river ice. In his brave attempt to rescue his young student from drowning, he was awarded  the Carnegie Medal of Honor posthumously for his bravery.

The Carnegie Medal of Honor provided a monthly stipend of $10.00 for each of his children until they reached the age of 18.

With this money, Kathreen's mother, Elisa Gibson, took her five children (the youngest being six months old), traveled with her brother to the grassy prairies of Alberta, Canada, near the city of Lethbridge, and there settled on her own homestead and built a home for her young family. Kathreen spent her teenage years in Alberta.

Kathreen married Earl Hecker there in 1914. They had six children; June born in Canada, William and Ferne born in North Dakota, Alice in Washington, Barbara and Beverly Joyce in Oregon.

The family moved to Alaska in 1938 where they made their home on a farm here in the Matanuska Valley. Kathreen lost her husband, Earl, in 1947 and eventually married Charles O. Huntley, who died in 1969. She later married Ted Glatfelder*, who has been with her through these last years.

The idea for this post came from Geneabloggers.com
__________
*Kathreen's third husband, Ted Glatfelder, was 29 years younger than Kathreen. He cared for her until she died. She was 100 years old at the time of her death and is buried in the Palmer Pioneer Cemetery in Palmer, Alaska.
Posted by Schalene Dagutis at 5:00 AM