I got interested in Aunt Joan's family when the documentation didn't match the stories Mom remembered about her childhood.  I wrote about those differences here and here. In this post, I'll detail what I've learned about Aunt Joan's five brothers:  George Edgar, Homer Bradley, Paul Orrin, Thomas William, and Maxwell.

George Edgar and Homer Bradley Bailey were born in Delaware, Ohio in 1905 and 1907, respectively. Sometime before 1910 they moved to Washtenaw County, Michigan, where William Bailey bought a farm. Paul Orrin was born that same year, and Thomas William was born in 1917. In 1918 their father, decided to become a missionary and moved the family to Anderson, Indiana. He likely attended the Bible school and training seminary there.  In 1920, the family traveled by train to New York City and boarded a passenger liner for Southampton, England, on their way to British East Africa, and what is now Kenya.  Most of the family lived in Kenya until 1929. However, the three older boys returned to the U.S. earlier.

In 1924 George traveled back to England and boarded the White Star Line's RMS Majestic. He arrived in New York City on 24 Jun 1924 and went on to Anderson, Indiana.  According to Homer's journal, his parents had given George the name of a family with which he could stay until he got organized. When he knocked on the door, their maid, appalled at his state of attire and cleanliness, told him to go away. From then on George was on his own and remained aloof from the rest of the family his entire life. He lived in many western states, married at least twice, and had at least six children. In the early 1950s, George and his wife, Lillian (Krull) opened the Rancho hotel in Bakersfield, California. George died on 1 May 1979, but Lillian operated the motel for another 28 years.   One of his sons went on to become a very successful real estate developer.

Homer Bradley and his brother, Paul Orrin, remained in Kenya until 1927 when they, too, returned to the U.S. to attend the Bible school and training seminary in Anderson, Indiana.  Homer married Vivian Opal Lewis, the daughter of a Michigan preacher. They lived in several states during the Depression where he was also a minister. In 1933 their family returned to Kenya, where Homer was a missionary until 1948 or 1949.  They had six children, all of which were born in Kenya except two. Homer died 18 Oct 1978 in Denton, Texas.

Paul Orrin married Lydia Lois Tilton in 1931 and they four children.  Paul taught at Indiana University in Bloomington, Indiana.  In June of 1952, he was lost control of his car on a rain-slicked road and was hit head on by a large truck. He was killed instantly.

Thomas William and Maxell Bailey returned to the U.S. from Kenya in 1929, traveling through India, Singapore, Hong Kong, Japan, Vancouver, and Seattle, mostly aboard cargo ships. I've not been able to discover much about Thomas, except that in 1930, he was living with his parents and younger siblings in Troy, Ohio. When his parents returned to Kenya in 1932, they asked another family to move in with their children and take care of them while the parents were away. Thomas married one the daughters. Soon after, he, his new wife her the family moved away, leaving Elizabeth, the oldest sister in charge of her younger siblings. She was 20 at the time. Thomas died on 10 May 1986 in Hotchkiss, Colorado. 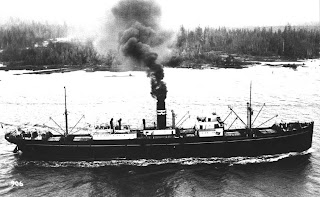 Osaka Line's cargo ship Paris Maru; the Bailey family traveled from Yokohama to Seattle on this ship in 1929

Maxwell's father registered his birth and forgot to include the middle name his mother had intended to give him. He married Lois Shaw, perhaps twice, and had four children.  He was a school teacher and taught in several states. He died on 11 Mar 2004.
Posted by Schalene Dagutis at 6:17 AM