Those of you who have liked my Facebook page, Tangled Roots and Trees, know I am researching my elusive grand uncle, Henry "Jack" Muir. All I knew when I started was his birth date, birth location, and his parents names.  I will post soon about everything I've learned about my grandmother's older brother, but today I'd like to focus on his obituary. Receiving the obituary was almost as mysterious as my grand uncle is proving to be.  A kind person started posting comments on Henry page on my family tree on Ancestry.com.  One of the comments was a transcription of his obituary. I later signed up for a day pass for the Times-Picayune archive and downloaded the image you see below.

Obituaries can be good sources of genealogical information, and Henry's obituary did that but also caused me to ask more questions. 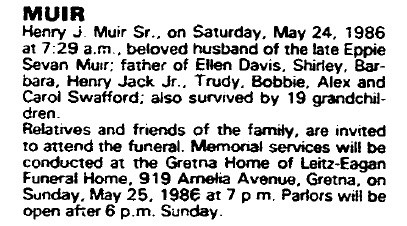 The new information the obituary provided me:
New questions the obituary has me trying to answer:
I have since learned from the Muir surname message board on Ancestry.com that Henry's youngest daughter, by Eppie, was named Trudy, not Judy as Dad had her listed.