9 Sep 2013 Update: I added a scan of the actual newspaper clipping.

Earlier this year, I brought my Dad's genealogy files home.  They were filled with great old documents, but this was something I had been searching for through the online archives of the Troy Weekly Call for months. It was an old clipping of Ida Mae Riggin's obituary. Ida was my great grandmother and died when she was 29 years old. 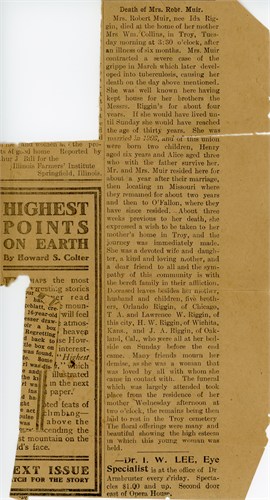 Mrs. Robert Muir, nee Ida Riggin, died at the home of her mother, Mrs. William Collins, in Troy, Tuesday morning at 3:30 o'clock, after an illness of six months. Mrs. Muir contracted a severe case of the grippe in March which later developed into tuberculosis, causing her death on the day above mentioned. She was well known here having kept house for her brothers the Messrs. Riggins for about four years. If she would have lived until Sunday she would have reached the age of thirty years. She was married in 1902 and of this union were born two children, Henry aged six years and Alice aged three who with the father survive her.

Mr. and Mrs. Muir resided here for about a year after their marriage, then locating in Missouri where they remained for about two years and then to O'Fallon, where they have since resided. About three weeks previous to her death, she expressed a wish to be taken to her mother's home in Troy, and the journey was immediately made. She was a devoted wife and daughter, a kind and loving mother, and a dear friend to all and the sympathy of this community is with the bereft family in their affliction.

Deceased leaves besides her mother, husband and children, five brothers, Orlando Riggin of Chicago, T. A. and Lawrence W. Riggin of this city; H. W. Riggin of Wichita, Kansas.; and J. A. Riggin of Oakland, California, who were all at her bedside on Sunday before the end came. Many friends mourn her demise, as she was a woman that was loved by all and with whom she came in contact with. The funeral which was largely attended took place from the residence of her mother Wednesday afternoon at two o'clock, the remains being then laid to rest in the Troy Cemetery. The floral offerings were many and beautiful showing the high esteem in which this young woman was held. 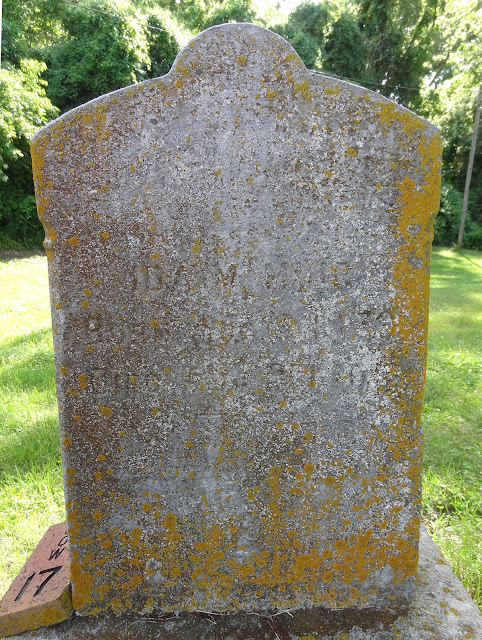 Ida Mae (Riggin) Muir's grave marker.
The idea for this post came from Geneabloggers.﻿
Posted by Schalene Dagutis at 7:39 AM