A Trip to Paris

I've written about Edith Mary Madeline Ternes before: here and here. Edith is communicating via voice tapes to a relative named Sofee, who is also interested in researching the Ternes family. They trade information and photos and, as you can see, information about themselves:

What a delightful dream you have of Paris. When I read that I was reminded of Henry Van Dyke's poem, "America for Me." In describing London and Paris about half way through the poem he said, "Oh, London is a man's town, there's power in the air and Paris is a woman's town with flowers in her hair." 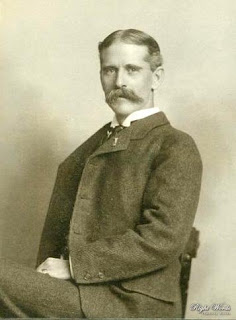 Yes, I went to Paris. It was one of the stops of a 49-day tour of the continent. We visited 7 countries and found them all fascinating. No doubt there have been many changes since that summer of 1954 but I still remember the highlights. It was like walking in a dream through places I never expected to see. I seemed always on the alert for fear I would waken in my bed at home. There were Montmartre, Maxim’s, Folies Bergere, Bois de Bologna, Sainte Chapelle, the Left Bank, Notre Dame Cathedral, the palace of Versailles and the Louvre with its haunting Mona Lisa. These things I remember vividly and would like to see again.

Maybe I had better make another promise to myself. One of our assignments when I was in the eighth grade was to make a promise and write about it. Our teacher was way ahead of her time and a wonderfully imaginative person. She said, "A promise made is a debt unpaid so make a promise to yourself and you will surely keep it." Along with my classmates I very solemnly made twin promises to myself - first that I would be a school teacher and second that I would go to Paris someday. My teacher was right. I did keep my promises to myself. Seven years later I began a teaching career which lasted for 47-1/2 years but it took me 36 years to get to Paris. 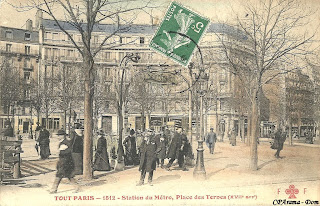 I made it and loved it just as I had expected I would. I stood on the sidewalk in Montmartre and hugged myself I was so delighted to be there. It was on the way back from the Bois de Boulogne that I saw the street sign with Pont de Ternes on it. It is pronounced Tern but spelled Ternes. The people are French. The next day I passed up a luncheon at the Eiffel Tower to walk back toward the Coq Hardee restaurant where we had lunch the day before in hope of finding that sign and taking a picture of it. I did find it. I hunted up a policeman or gendarme and asked him about it. My inexcusable French forced me to write my questions which he answered for me. He told me the area and the street were named for a very old family who lived there. I should have tried to locate someone named Ternes in the phone book or through the gendarmes. When I came home I learned from a cousin that some researcher had found out that one of the Ternes men, who fought in the German army during the Franco Prussian War, fell in love with a French girl, married her and settled down in France. You see there is some romance in our history. 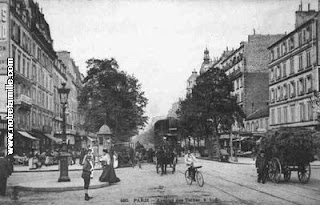 I think I am on the trail of something now. Louise, my cleaning lady, has a brother living in a suburb of Paris and she has written asking him to try and get me the pages of the Paris telephone book with the name Ternes on it. If I get them I shall try to communicate with some of them and see if they know where their family began. My French is inadequate but I am sure someone will help me out. How is your  French? Maybe you would like to write too.

Louise just called and gave me three addresses for people who are named Ternes and live in Paris. One is a corsetier, one a furniture mover and one an automobile dealer I think.

Louise called and gave me four Ternes businesses listed in the Paris telephone book. One is Ternes Immobiliers or furniture movers at 1 Rue Ne'va in the 8th district. Ternes Tapis Maquettes (Textiles) 4 Rue Ville Bois 17th District Ternes neg a cious cions d'automobile 71 Boulevard Gouvion St Cyr; 7th District and Les Ternes Corsetts at 37 Avenue McMahon 17th District. I think I will try a little strategy on them all. I will send them pictures of their name on the street signs of Dearborn and possibly one of the large grave marker in the cemetery. This may arouse a little curiosity in them and they may respond.

It was obviously much harder to research your genealogy without the Internet!
Posted by Schalene Dagutis at 5:00 AM