Several weeks ago, I read Traditions and Reminiscences, Chiefly of the American Revolution in the South, including Biographical Sketches, Incidents and Anecdotes, Few of which have been Published, Particularly of Residents in the Upper Country by Joseph Johnson, which was originally published in 1851. The book includes much information about William Bull (1710-1791), the brother of Colonel Stephen Bull of Beaufort, South Carolina, who married Elizabeth Bryan.[1] William Bull was a medical doctor and completed his studies under Boerhaave, the famous Leyden physician. He returned to South Carolina and became one of the colony's most eminent citizens, serving as royal governor several times between 1760 and 1775. In 1782 he went with the British troops to England and died there. 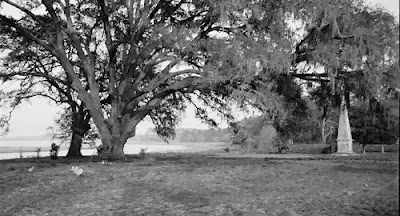 Memorial to William Bull, placed at Ashley Hall by Hannah Beale Bull, 1792. Photo courtesy of the Library of Congress
"A steady friend and affectionate husband…on this land, part of his estate and place of his birth, this obelisk was erected, sacred to his virtues and her grief, with duty and affection by his disconsolate widow"

Two humorous stories are included in Traditions and Reminiscences about William Bull. A Dr. Samuel Wilson told the author the following anecedote:

While Governor Bull was walking one day before his residence and the State House, he was met by a plain, uneducated back-country man, who stopped and stared at him with open mouth. The governor also stopped and civilly asked the country man, "what is the matter, friend?" The fellow replied, "Really, Mister, you are the ugliest man that I ever saw in my life." The governor smiled as if neither surprised nor displeased, and with much good humor said, "But you would not say so if you had seen my brother, Stephen." 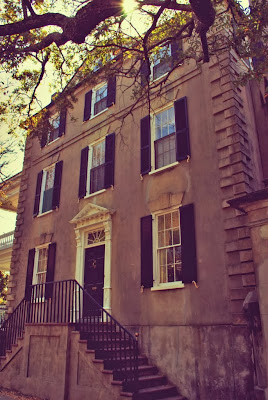 Governor Bull was so great a favorite in South Carolina that parents frequently named their children after him. There was a plain, respectable man then in Charleston, a tailor, named Frog. Influenced by some favor or patronage received from John Walters Gibbs, of facetious memory, Frog asked Mr. Gibbs to be the godfather for his son, to be named John after his proposed godfather. Mr. Gibbs promptly assented, and the day was appointed for the ceremony. When the parties met, and were going up together to the font, Mr. Gibbs asked permission to give the child an intermediate name, after their worthy governor, Bull. Permission was of course granted, and the child was baptized John Bull; the ceremony was over, and the parties separated in great good humor. But when the whole name was pronounced, and the child called, John Bull Frog, the parents were dismayed; the citizens all joined in the laugh and all the Frogs, little and big, hopped off to escape the continued jests.

NOTE: William Bull was born on 24 September 1710 at Charleston County, South Carolina Colony to William and Mary (Quintyne) Bull. He married Hannah Beale on 17 August 1746 at South Carolina. He owned Ashley Hall plantation on the Ashley River in Charleston County, South Carolina. The plantation remains under private ownership today and is listed on the National Register of Historic Places. Bull served as the royal governor of South Carolina five times: 1760-61, 1764-66, 1768, 1769-71, and 1773-1775. He refused to take an oath of allegiance to the revolutionary government and left for England in 1777. He returned in 1781 during the British occupation of Charleston. Bull was evacuated in December 1782 by British troops. He died in London on 4 July 1791 at London, England. He was buried on 18 July 1791 in St Andrew Churchyard at Holborn, London, England.  He and Hannah had no children.
Posted by Schalene Dagutis at 6:24 AM