Out of Africa: Water Buffalo Trouble

My aunt's father was a missionary. He took his family to what was then known as British East Africa in 1920 and they lived there for nine years.  My aunt's brother, Homer Bailey, wrote an unpublished autobiography, which I was able to track down. In this story, Homer and his brother try to help some goat herders.

Goats go for bushy wild sorts of country -- the denser, the better. They even do a bit of climbing in a goat-y kind of way. Reaching those higher branches is a fine way to get a first course in the morning. With not a fence for miles, just bush for them to eat, this was for goats, the perfect life. Always with the goats were the herdsmen, mostly young boys, following along, going with the goats. This bright morning as the goat bells chimed there in the back of the beyond, they bumped right into a water buffalo.

Now, I mean the big, bad, mean kind of water buffalo. The kind that is apt to chase a man around a tree. Their horns curve outward, then downward and slightly backward, turning up at the tips. That is the kind of rascal to fear for he is easily enraged and deadly when aroused. If encountered in the open, he's the kind that just might tromp you, stomp you, and throw you in the air with his wicked horns. The buffalo is a bad enemy, determined to keep on coming at you until one of you drops. 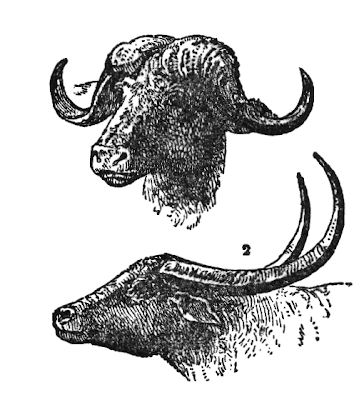 The herd boys bumped into this big fellow about midmorning. The buffalo did not seem to mind the small, noisy goats nor did he really object to the herd boys, but they knew better than to get too close. What disturbed the herd boys was the way this buffalo and his relatives came by night, again and again, ravaging and ruining their small vegetable gardens. You have to see a garden after a buffalo goes through it to believe it. For this compelling reason they must try to be rid of this massive water buffalo.

Our family lived among these people not a great distance from the damaged gardens. The young herdsman wondered if we would come to their aid. He would lead us right to the buffalo. My brother and I hurriedly got our guns and ammunition, buckled on our sheath knives, and we were on our way. Soon we were in the forest wilderness. At first there was a path of sorts, but this faded away. Our guide led us through heavy underbrush. We could not see more than a few feet in any direction. Soon our herdsman guide said, "We're getting close, be very quiet." We walked single file as we cautiously edged forward, stopping every few feet to listen.

An aging dog had joined our party. When we moved ahead, he too would advance. When we stopped, he would glance over his shoulder and hold up too. It would have been nice if were it possible to communicate because he had a big advantage over us in the smell department. 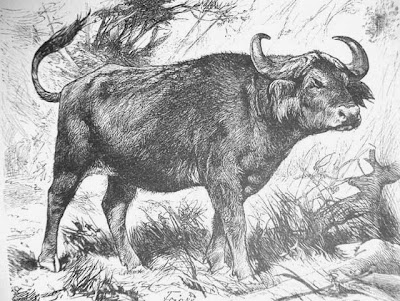 It seems you are never really ready when the time comes. Things have a way of happening too fast for our minds to act.  All of a sudden, the dog gave a deep throaty growl and came at us in reverse. His hackles were up and his teeth were showing without a smile. In that same second, it seemed, a lot of brush moved toward us. Visibility was nil. We now knew the creature was right there but see it, we could not.

The goat boy dove for a tree, which was hardly worthy of the name. It was a runty sort of refuge but the idea of getting above the ground appealed to me and I followed the boy up the tree. Having thus climbed above the surrounds, my eyes really bugged as I looked almost straight down on a great big blackish body with a set of massive horns. The buffalo was facing straight at us. His body was practically covered in dense growth. Our tree was most inadequate against such a menace. He looked as though he could easily shake our tree to bits.

I stood on a low limb holding on as best I could to the tree trunk and my 4.05 shotgun. It was British made, a combination double barrel shotgun. It was a great gun in its day, but required the use of black powder, which was a limitation. I pulled the old shotgun around, drew a line on the broad back below and fired. I should have set off both barrels, that would have really rocked the buffalo, but it would likely have knocked me right out of the tree. 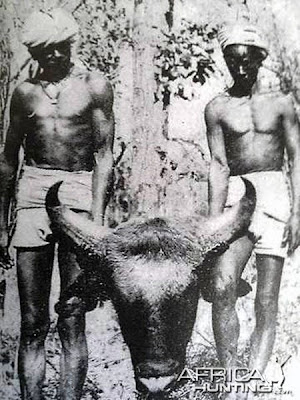 The buffalo made a quick decision to get out of there now! Can you imagine a tug boat -- squat, solid and powerful? Well, the buffalo, as it were, called for "full speed ahead." He did a graceful curve, passing off to our right, missing the tree and all of us. As he departed his head and horns spread the brush and shrubs and he sailed away in a sea of green. In seconds his proud stern disappeared in the deep forest.

What had I done wrong? I had certainly blown that one badly. In my climbing, clinging, and firing, I was nervous. Opening the breech of the gun, you will not believe what I found. I had dusted that old buffalo down with shotgun pellets. Hardly could that that have been effective and to the buffalo it was insulting, irritating, but in no way deadly.