52 Ancestors #5: My Grandfather and the Orphanage

My paternal grandfather was Marvin Edward Jennings, Sr. When he was not quite 10 years old his father committed him to an orphanage. 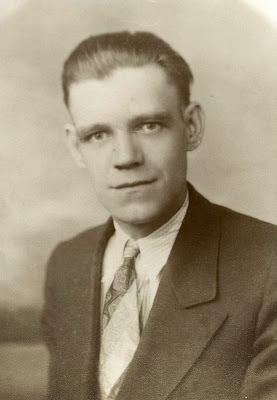 Referring to our conversation with you on last Monday concerning the admission of my brother into your institute, beg to enclose herewith formal application, his Father being well pleased with the conditions under which he will be admitted, provided, of course, your Board of Trustees consider the application favorably [sic].

Concerning Marvin, would say his is of amiable disposition, easily controlled, and a bright and studious child. He has been attending the Roanoke public school since old enough, and has successfully passed all examinations which places him in the second "A", Primary grade at the beginning of the next school term.

You will note from application sheet that he has had most of the diseases of children, but his general health is good; his slight lameness is not a deformity, but due to effect of measles which he had when quite a small child.

His father is 68 years old, has fairly good health and was for many years engaged in the mercantile business in Roanoke, but for the past four or five years has been a building contractor.

You will also find enclosed herewith letter addressed to you from  Hon. H. B. Trout concerning the application form.

The writer is especially anxious that the child be placed under your care, and sincerely trusts that the matter may receive favorable consideration by your Board of Trustees.

This letter was written by Daniel Melvin Jennings, the half brother of my paternal grandfather, Marvin Edward Jennings, Sr (1901-1961). Marvin was the youngest living child of his father, Charles Edward Jennings, and his second wife, Effie Davis Beard. A few years after Effie died in 1906, my grandfather was committed to the Lutheran Orphanage[1] when he was 10 years old. Dad communicated with the orphanage and traveled to Salem, Virginia, to obtain a copy of his father's file. 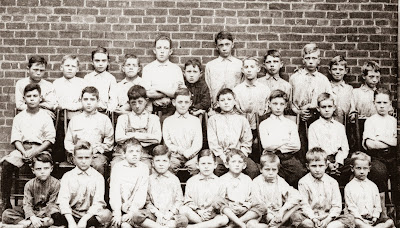 Lutheran Orphanage photograph; my grandfather is in the back row, fourth from the left

NOTE: Marvin Edward Jennings, Sr, was born on 16 Nov 1901 at Roanoke (Independent City), Virginia, to Charles Edward Jennings and his second wife, Effie Davis (Beard) Jennings. He was committed to the Lutheran Orphanage on 12 Aug 1911 at Salem (Independent City), Virginia. He married Alice Muir on 13 May 1924 at East St Louis, St Clair, Illinois. They had three children: Pearl Marie Jennings (1924-1924) and two sons, who are still living. Marvin Jennings joined the Odd Fellows Lodge on 1 Nov 1945 and served as the Noble Grand of the Columbia Lodge No. 10 on two separate occasions. His last job was with the General Accounting Office at Washington, District of Columbia. He died on 1 May 1961 of an abdominal aortic aneurysm at Northern Virginia Doctor's Hospital at Arlington County, Virginia. He is buried at National Memorial Park at Falls Church (Independent City), Virginia.
Posted by Schalene Dagutis at 5:04 AM