On December 26, 1811, 17-year-old Mary Isham Page attended the benefit performance for Mr Alexander Placide at the Richmond Theater. The performance was originally scheduled on December 23rd but was postponed until the day after Christmas due to bad weather and death of Edgar Allan Poe's mother, a stage actress, who performed frequently in Richmond and died there just three weeks prior. 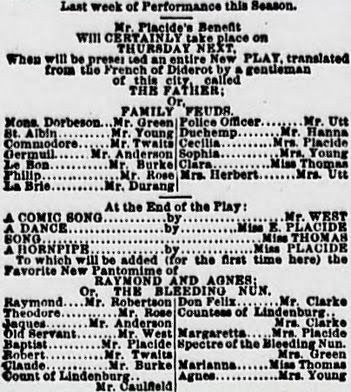 Program for the benefit performance for Mr Alexander Placide

Mr Placide was a French-born dancer, mime, acrobat and actor who was immensely popular at the time. The first act performed was a French comedy by Denis Diderot. The second act was to be the first ever performance of a pantomime entitled Raymond and Agnes or the Bleeding Nun. This performance was much anticipated and over 600 people attended that night, including many of Virginia's social elite.

The fire started soon after the curtain fell after the first act. A chandelier, which was mistakenly still lit, had become entangled in the cords used to lift it to the rafters. As a result it swung wildly to and fro and caught some scenery props on fire. Flames spread extremely rapidly and were initially hidden from the audience because the stage curtain was down. Seventy-two people were killed that night, including Virginia's governor, William Smith, and 17-year-old Mary Page. 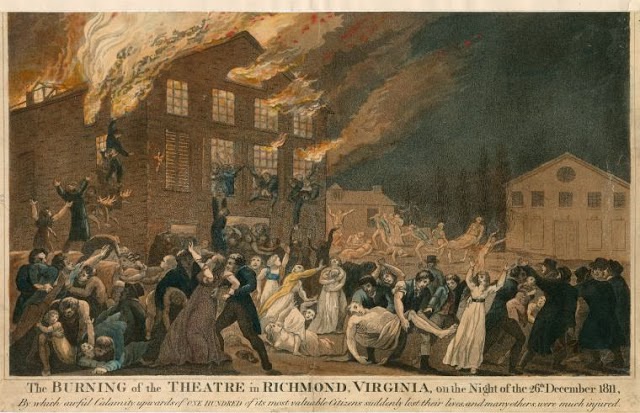 "The Burning of the Theatre in Richmond, Virginia on the Night of 26th December 1811, By which awful Calamity upwards of Seventy Five of its most valuable Citizens suddenly lost their lives, and many other, were much injured."
Lithograph produced in Philadelphia by B Tanner in 1918; image courtesy the The Albert and Shirley Small Special Collections Library, Library of Virginia

Mary Page was the daughter of Carter and Mary "Polly" (Cary) Page of Willis' Fork, Cumberland County, Virginia. Carter Page left the College of William and Mary in May 1776 to join the Continental Army. He rose to the rank of major and was the aide-de-camp to General Lafayette during the campaign against Cornwallis. Polly Page was a lineal descendant of Lord Hunsdon. Mary Page, who died that night, was also the grand niece of Frances (Bland) Randolph Tucker, the first wife of my sister-in-law's third cousin six times removed.

The day after the fire the Common Council commissioned a Committee of Investigation which later blamed the inferior design and construction of the theater for the great loss of life. Monumental Church, designed by Robert Mills, was later erected on the site of the theater. The names of victims are inscribed within the church.

_________________
NOTE: This post is dedicated to work colleague, Brian Haney, who provided nearly instantaneous grammar assistance via Facebook.
Posted by Schalene Dagutis at 5:27 AM