Sometimes It Takes a Village

Robert Muir (1875-1956) was my father's maternal grandfather. He immigrated to the U.S. with his mother, Margaret (Semple) Muir, half-sister and younger siblings in 1887 when he was 12 years old and followed his father into the coal mines. His daughter, Alice (Muir) Jennings, my grandmother, always said he was union agitator. According to her, he got run out of coal patches (company-owned towns), blackballed from employment rolls in several states, and shot at.

Our family never knew much about Robert Muir's life other than he was born in Scotland and his parents were James and Margaret (Semple) Muir. My father had his birth registration (1875), naturalization record (1896), his first wife's obituary (1909), and knew he had later married someone named "Liz," his social security card (1936), his West Virginia miner's certificate (1942) and death date (1956). Robert Muir died intestate in Van Buren County, Tennessee, and Dad had the notices of the public auctions held to sell his personal and real property as well as the final distribution of his estate to his heirs (1957). Dad also knew from his mother the approximate birth dates and places of Robert's children. 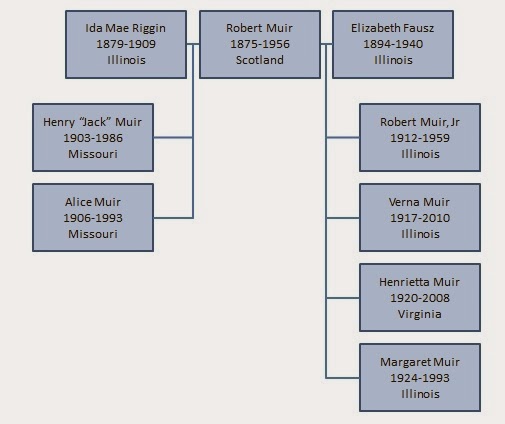 Robert Muir and his children

After entering all the known information into my family tree on Ancesty.com, I got the green leaf hint symbol! Some of those hints were obviously records for my Robert Muir and included the 1881 Scotland census, 1900 and 1910 U.S. federal census records and then nothing, which was crazy because he should have been enumerated in the 1920, 1930, and 1940 census. On the Illinois Secretary of State and State Archivist website, I was able to find a reference to Robert and Ida Mae (Riggin) Muir's marriage license. Ida Mae was his first wife and my great grandmother.

I was able to find his second wife, Elizabeth "Liz" (Fausz) Muir in the 1900, 1910, 1930 and 1940 census as well has her 1940 death record. She indicated she was divorced in the 1940 census, but her death record, also dated 1940, listed her husband as Robert Muir. I've not found either of them in the 1920 census. The only members of the family I have been able to find in the 1920 census are my grandmother who was living with her paternal grandmother at Nineveh, Missouri. 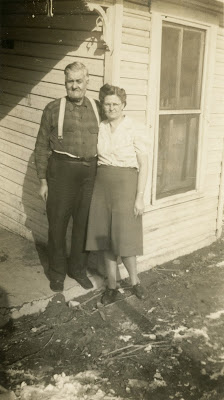 Robert Muir with his daughter, Henrietta Muir, taken when visiting my grandmother in Arlington, Virginia, from the author's personal collection

I knew his oldest son, Henry "Jack" Muir's, second wife's name was Armita. I found them in the 1930 census, which indicated Armita was born in Louisiana. A newly discovered Semple cousin found her maiden name and date of their marriage license on the Louisiana GenWeb archives. I started hanging out on Ancestry.com's Alleman and Muir message boards and connected with some of Henry Muir's grandchildren. They didn't know too much, but they knew different things than I did which gave my research efforts for Robert Muir some direction.

I joined the McDowell County, West Virginia, genealogy Facebook group because Robert's Social Security card and miner's certificate indicated he worked there in the late 1930s and early 40s. Not two days later I received a Facebook message from an ex-work colleague, who is also a member of the McDowell County group -- what a small world! My friend claimed to "dabble" in genealogy.  I sent him a timeline spreadsheet I created for Robert Muir, which included all known information and what was missing.

A few days later, my friend found Robert and his second wife in the East St Louis, Illinois, city directories for 1924, 1926, 1928, and 1930. They were living at the same house on 436 N 80th, which is now a vacant lot. When the 1930 census was enumerated, second wife Liz was listed as head of house, living at the same address with her three youngest children and her mother. In 1940 she was a lodger, living across the street and said she was divorced. She died later that year. Once I attached the city directories to Robert and Elizabeth (Fausz) Muir, I got another green leaf, which was his World War I registration card. It included an address just a few blocks from the address listed in the city directories. 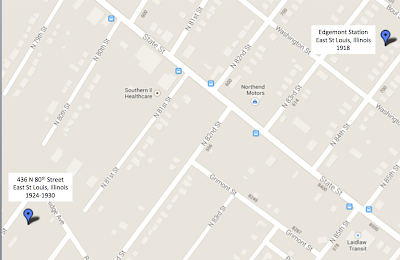 I still don't have the 1920, 1930, or 1940 census records for Robert; and Tennessee is giving me the run around about his death certificate. But I am getting closer and have new research avenues to pursue, one of which will be to submit a Freedom of Information Act (FOIA) for Robert's Social Security application. He received his social security card on December 27, 1936. Typed on the card was this information, "Pocahontas Red Bird Mining Co, Iaeger, W Va." I also plan to write to the United Mine Workers' of America and ask about his pension information. 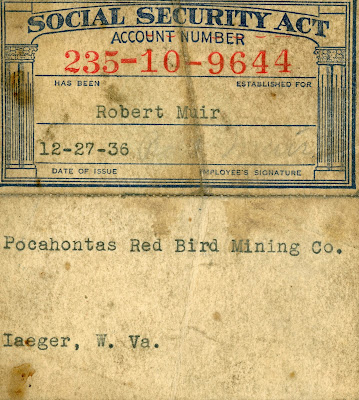 So with the help of a newly discovered cousin, grandchildren of Robert's son Henry, and an ex-work colleague, I have learned more about my great grandfather. Sometimes it take a village! What other research avenues do you suggest?

_______________
Robert Muir was born 16 Mar 1875 at Dalserf, Lanarkshire, Scotland to James and Margaret (Semple) Muir. He arrived in the United States on 30 September 1887 at Philadelphia, Pennsylvania, aboard the steamship Manitoban and was naturalized on 10 October 1896 at Livingston County, Illinois. He married Ida Mae Riggin on 12 October 1902 at Collinsville, Madison, Illinois; he married Elizabeth "Liz" Fausz about 1912. They were living in East St Louis, St Clair, Illinois in 1918. From 1924, 1926, to 1928 the family lived in a home Robert owned at 436 N 80th Street, East St Louis. Liz and the three youngest children were living in at the same address 1930. Robert was not listed as living with the family but was included in the city directory for 1930. All of their children, except their third daughter were born at Illinois; she was born in 1920 at Virginia. Robert and Liz divorced or separated sometime before 1935. One of Robert and Liz's daughters and her family were living at Robert's house on 436 N 80th Street in 1940. Robert died on 27 June 1956 at Van Buren County, Tennessee.
Posted by Schalene Dagutis at 5:13 AM