Out of Africa: Kagui and the Python

My aunt's father was a missionary. He took his family to what was then known as British East Africa in 1920 and they lived there for nine years.  My aunt's brother, Homer Bailey, wrote an unpublished autobiography, which I was able to track down. In this story, Homer explains how dangerous pythons can be.

Many moons ago, Kagui, the canine, lived down the road from our house. He was not an outstanding dog. He had no pedigree, however, he did possess a few ticks and fleas. For coloring Kagui was a murky brown, set off by some dingy white, as vague as his ancestors. Kagui lived a simple life in a land not cluttered by speeding cars or trucks. However, there were plenty of dangers in his simple existence. There were subtle smells that put fear in the heart of the dog. Out of thin air would come an odor that sent a tingle the full length of his spine to the tip of his tail. From awkward, wobbly puppyhood there were times, when tail tucked tight, Kagui would head to his hut fast or he would be consumed.

Even before his legs were able to keep up with the with the goat herd going out to graze, he followed. The herd boys just loved this little waggy-tailed puppy and would carry him over the rough spots. There were no fences when we lived in what is now Kenya and the herd boys would have to make sure the goats did not get into family gardens. Soon, Kagui was helping to keep the goats in line. Should the boys not be watchful, they could find they had lost some of the herd. When this happened late it the day, it was very apt to result in the death of the lost goats. Kagui was a great help in trailing the wanderers and helping them return to the fold.

Many were the lessons Kagui had to learn. Early in his life, for example, he learned to leave a porcupine alone. That was just sure trouble stacked against a dog. Kagui also found it was not good to go down a hole. All too often the hole was occupied by something that didn't mind eating dogs. Some old dog told him it's best to stay reasonably close to the fire when it's dark. When his nose told him there were enemies about, he would bark loud and long, but was always ready to flee for the safety of the fire.

One day out with the goats in bush country something very strange and very different appeared. This mass had a smell Kagui had never before encountered. Whatever it was, it had a shape Kagui had never seen. The goats galloped away to a safe distance, while the sheep fled in consternation. The herd boys were curious but did not venture too close. This object did not move. Kagui watched closely this strange sinister mass. His self-preservation instinct caused him to feel this thing to be a menace. 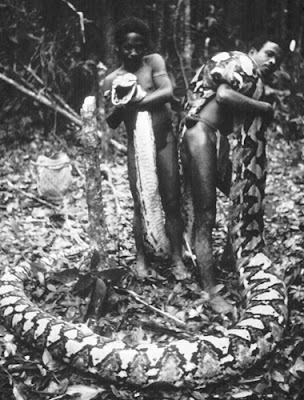 Photograph courtesy of The Scientist Magazine. This python was killed in the Philippines

He growled at it and circled it cautiously eyeing it intently. Then he barked at it savagely. The mass made not the slightest response. It did not even move. It seemed totally unimpressed by the frantic barking dog. Only the beady eyes kept track of Kagui as he stormed about, attacking, then retreating, trying to figure out this thing. For some strange reason, this enemy did not run; it did not charge; it made no advance or did it retreat. Nothing Kagui had ever encountered behaved like this strange silent mass.

Kagui kept what seemed to him to be an adequate distance, at least by comparison to everything else in his experience. What he did not know was pythons literally throw or thrust several feet of their bodies into an assault. Thus the battle lines were set. The fact the mass didn't move caused Kagui to take greater risks, darting closer.

All of a sudden, the dark shiny body flew out at him fast as a flying fist. This took Kagui completely by surprise. In an instant he was caught, trapped by the body of the python. Though he tried desperately and struggled with all his might, he could not escape. Coil after massive coil surround him in seconds and they choked and smothered his breath away. 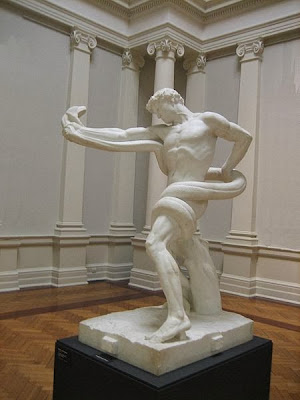 Athlete Wrestling with a Python by Frederic, Lord Leighton (1877). Photograph courtesy of Wikipedia.org

The herd boys came to our house at a run to tell us of this awful thing. We went out with them into the wilds and shot the python. After skinning the python, we opened him up and removed Kagui's body. We thought he would be badly broken in form. Not in the slightest. There was not a mark on him. He looked very natural indeed. Pythons do not squeeze enough to break bone. Rather the pressure is so great as to make breathing impossible and arrest blood circulation. That is the way pythons kill.