A Surprise in My Inbox: Ternes Family Photograph

I've written about Edith Mary Madeline Ternes before (here, here and here). Edith communicated via voice tapes to a relative named Sofee, who is also interested in researching the Ternes family. They traded information about themselves and photos.

After reading the following section of the transcript last November, I scoured the Internet, looking for the photograph of the Anthony Ternes family Edith described in the transcript.  No luck.

The Ternes family was German. Mother Ternes was part French. She lived in a French community, Newport, Michigan, and spoke French. During the first war this led to some rather lively discussions at the dinner table. I have often wondered what Mother would have said had she found out, as I have since I have been researching family trees, that her family could well have been more Spanish than French. Dr. Valade, mother's grandfather traveled from Spain to Canada to Newport, Michigan. That Dr. Valade was your great, great, great grandfather.

Mother's father was August Loranger and her mother was Mary Valade. Mary died and August Loranger married again. His second wife had children of her own and was not too happy to have little Madeline Laura at all. She reportedly treated her so badly that her Grandmother Valade took your Great grandmother to live with her. Thus she was raised with aunts and uncles. This was the reason Mother always felt so close to Clara Valade Beckham. They are aunt and niece but raised as sisters.

Now, if you take the large family picture I will tell you about the people in it. There are three men and a woman in the back row. They are George Ternes, William Ternes, Theresa Ternes and Albert Peter Ternes. 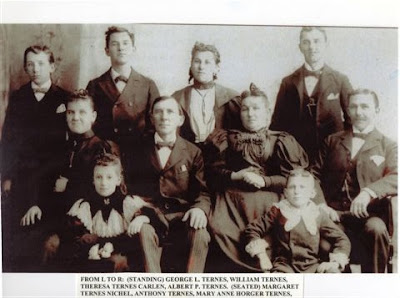 The first boy in the last row is George Ternes. George married May Connolly. They had four children, Edna who became a nun, George Junior was in the war and I believe was at Pearl Harbor. The experience left him sort of at loose ends but he finally married a beautiful young lady (I am still trying to find out her name) They were married just 30 days and she died with spinal meningitis. George was devastated by this tragedy and it was quite a while before he married again but he never could come to terms with the disasters in his life and he finally decided it wasn't worth trying to cope with it any longer so he chose his own time to die. Claire married James Martin and lives here in Dearborn. I do not have her children's names. And then there was Lloyd the youngest. I see him at church sometimes. He is a fine young man with a family and he runs the Ternes Paint Store right here in town. 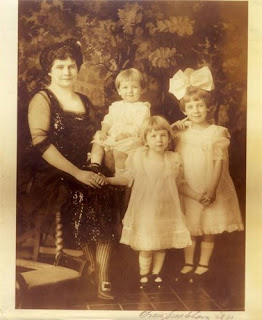 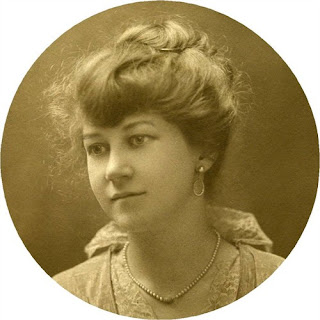 The second young man in the family picture is William Peter Ternes who married Elsie Gerstner and they had six children as near as I can find out. (Note: You may remember from an earlier blog post, they eloped.) They were Evelyn who married a Monaghan boy, William who married Madeline Maillue whose father was a lawyer and her mother was an opera singer, Ruth, Joy Marion,(2) Jack and Donald.(3) Ruth was drowned out at the cottage on Hickory Island. She was about three years old. After William died Elsie married a Mr. Deacon and they had one more child called John P. Deacon. 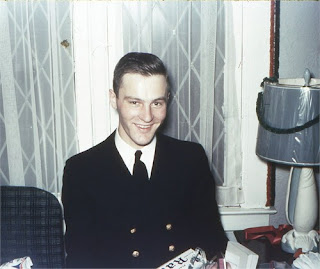 The lady is the back row is my favorite Aunt, Theresa, whom we called Aunt Trace. She married Albert Bernard Carlen a musician and piano and organ tuner and repairer. They had four children, Lucille, Eugene, Dorothy and Bernard. Lucille married William McCleer, Eugene became a priest, Dorothy became a Monroe nun with the name of Sr. Claudia. Bernard married Frances Shulte, a nurse. They had four children, Marie Therese, Dorothy, Kathleen known as Kitty and James. Then they called the whole thing off and were divorced and Bernard married Rose somebody or other. I'm still working on that name too. Marie Therese married William D. Hopkinson and they had six children, Elizabeth Ann, Donald, Ann, Kathy, Amy and Patty. Dorothy married William Beers and moved to California. They have three children, William, Mark and Shawn. Kitty works for the social services in Detroit and has never married. James lives in California and his aunt doesn't know if he is married or not.

The other man in the last row is Albert. Albert was a handsome confident man who was a very successful business man. He and his three younger brothers, Frank, your great grandfather, William and George were in the coal and lumber business for a number of years. The company was called The Ternes Coal and Lumber Company which was quite normal. Albert married Maude Burke and had three sons. Arthur, Howard and Paul. Arthur married Laree but I do not know her last name yet. They were divorced and I believe he married again a girl by the name of Esper, another good old Dearborn name. I believe he had two children Dale and Donald but I do not know by which wife. Howard married a lovely girl with an odd first name. She was Steve Rooney. They had a daughter Burke. I think there were other children but I have not been able to track them down yet. Paul married Patricia O'Reille and they had three children, Paul, Patricia and Michael. About 1918 Aunt Maude died. I remember that very well because the boys stayed with us for a few days. Al later married Helen Reber and had one more daughter Alberta Ternes who married Bill Bent.

The young woman sitting in the middle row is Margaret or Maggie as she was called. Maggie married Peter Neckel and this seems to have been a mis-mating if ever there was one. Margaret and Peter had three children, only one of whom Alice lived to grow up. The other two, Madeline and Alfred, died as children. Alice married Joseph Hammel and had six children Joseph, Robert, Margaret Kohlmeier La Salle Renelda Bonefant and Mary Alice Best. 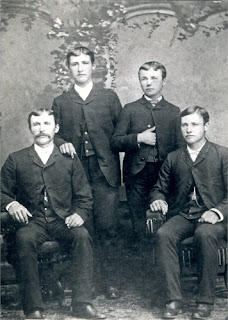 Next in line is Grandpa Ternes, your great great grandfather Anthony who, I understand was especially posed with his knees covered by hands to cover a hole in his pants. When he went into the photographer's studio he tripped and fell, tearing both his pant legs. Next to him sits Grandma Ternes who, by the looks of her must have been the authority figure in the family. I never knew her but Mother spoke highly of her and grandpa too, so there must have been some good to her. Then there is Frank, your great grandfather. He was a handsome man, good, kind, and with a terrific sense of humor. We loved the stunts and tricks he used to pull on us.

I hope you've enjoyed how so many pieces of the Ternes family history are coming together. I am thoroughly enjoying getting to learn about this history and meeting Ternes family members.

_______________
(1) My connection is the granddaughter of Christian Ternes, who moved to Panama and changed his name to Charles Ternes De Reuter. His very interesting story may be found here.

(3) I have also been in contact with Donald Ternes' daughter on Facebook.
Posted by Schalene Dagutis at 5:00 AM