Robert Lee Jennings, a legend from Amherst County and the world of bluegrass music passed away last year. In the event of his death, he asked family to share his favorite line from Bill Monroe's Uncle Pen song:

"I'll never forget that mournful day when old Uncle Pen was called away, he hung up his fiddle and he hung up his bow and he knew it was time for him to go." 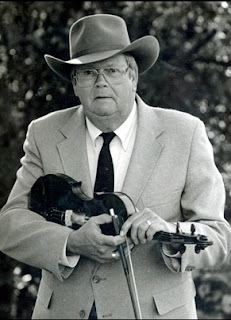 Robert Lee Jennings, 75, of Amherst passed away on October 25, 2012. He is survived by his wife of 57 years. Born February 6, 1937 in Amherst, he was a son of the late Robert Lee Jennings, Sr. and Ola Mae Chambers Jennings. He was a member of Mt. Pleasant United Methodist Church. He was self-employed, a member of Virginia Nurserymen's Association, a brethren of a Masonic Lodge and Shriners International. His passions were coaching little league, hunting, fishing, playing and teaching music, and continuously serving his community.

The family will receive friends immediately after the service has concluded. Those wishing to make memorial contributions, consider Gentle Shepherd Hospice of Lynchburg or giving "a concern" to the charity of your choice. "Much obliged!"
Posted by Schalene Dagutis at 6:08 AM

Email ThisBlogThis!Share to TwitterShare to FacebookShare to Pinterest
Labels: Jennings