Trip Around the World: Kenya to the U.S. (the Asian Route)

William Judkins Bailey took his family to British East Africa (Kenya) in 1920(1) so he could be a missionary there for the Church of God. Their oldest boy, George, returned to the United States in 1924. His next oldest sons -- Homer and Paul Orrin -- returned to Indiana in 1927. The rest of the family traveled through Asia in 1929, including their youngest daughter, my Aunt Joan, who was born in 1921 at the Kijabe Mission Station. Maxwell Bailey was 10 years old at the time the family returned home. This is his description of the trip from his journal, which he wrote several years later:

We arrived in Torch, Ohio in late 1929. Six months for the journey and all the visits along the way probably is not to far off. A train ride of approximately 300 miles with many stops and layovers from Nairobi to Mombasa could take at least two days. The voyage on the S/S Alora from Mombasa to Bombay, with a stopover at Poorbundy, a day's sail northwest of Bombay, would have taken most or all of a week.  Often after one is safely on board a ship, there could be a couple days of additional loading of freight. A scheduled departure time just wasn't the way it was done.

In Bombay, we visited many places. The most memorable was the Tower of Silence. The Parsees of Bombay believe the human body is sinful and defiled. The earth must not be polluted by burial. Fire is pure and sacred. The body must not be cremated. Hence the tower. The tower is 14- or 16-feet tall and perhaps 40- to 50-feet in diameter with a small door on one side and no roof. Bodies of men are placed along the outer row, women in the middle row, and bodes of children are in the middle. A deep pit is in the center of the circle. Hundreds of vultures clean the bones and scream at each other as the glide through the sky and roost along the top of the tower. The Tower of Silence seemed like the noisiest place on Earth to me! 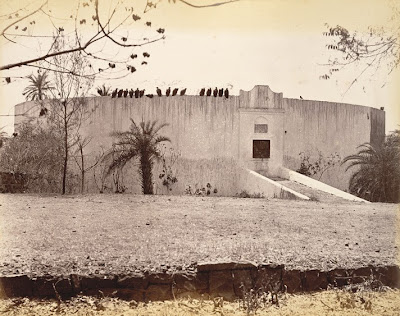 Tower of Silence in old Bombay

We traveled across India by train. At each stop, at least one man on the station platform walked by the open train windows announcing, Chi gerram, chi gerram -- coffee. He has a large urn and tin cups and for a price, coffee is available.

Monkeys are sacred. No one denies a monkey anything. They will enter the train by the open windows and leave via another window further down the car. En route he may have picked up ladies handbags or anything of value not closely guarded. His owner is a bit richer.

We arrived in Agra about 2:00 a.m. Daddy hired a rickshaw, or two-wheeled conveyance pulled by a man, to take us out to Taj Mahal. He bribed the guard and we finished our nights' sleep stretched out on the marble window sill on one side of the building. When the sun rose, we greeted it from the top of one of the minarets that stand guard at each corner of the main platform upon which the structure rests. 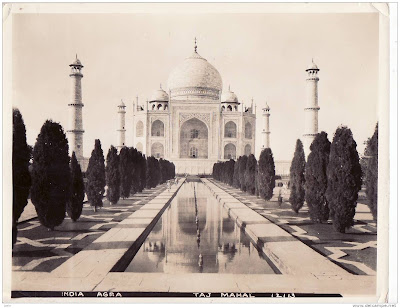 Calcutta is certainly one of the larger, if not the largest cities in India. There are people everywhere, turn as you may, people and more people. Everywhere in Calcutta one would see temples of worship. The show is continuous, hour after hour. 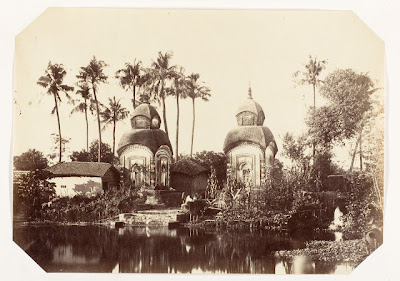 Temples of Calcutta. Photo courtesy of the Metropolitan Museum

From Calcutta we made a side trip to Cuttack. This city had been a swamp at one time, inhabited by alligators or crocodiles. Dead babies, live girl babies, any unwanted babies were tossed in. Some imaginative group filled the swamp and on the fill ground built the Shelter. When we visited, there girls of all ages there, sitting on a long porch waiting with their rice bowls for a meal.

We boarded the S/S Takada for the trip to Singapore. Word was passed through the ship's passengers that pirates had attacked the ship ahead of us but we never saw any pirates.

From Singapore we traveled to Hong Kong. I don't believe it to this day, yet I saw it. A Chinaman had his children -- two little boys and a girl -- standing on a long, low bench. Their arms stretched out towards each other and head tilted back so far that teacups could be placed in each hand and forehead. Tea was poured in all the cups. By pure magic, it seemed to me, their feet, firmly on the bench. They leaned back further and further until they were horizontal. Then yet further back until the back of their heads were on the dock. Slowly, they moved back to a vertical position and never a drop of tea was spilled! Of course, coins showered to the dock from the ships' passengers.

We ascended Victoria Peak by cable car before traveling by train to Shanghai. We all learned to use chopsticks there. Father made sure of that. The walls of the houses were made of oiled paper over wooden frames. Since earthquakes are very common, a house built of light materials would do its occupants less damage than heavier ones. 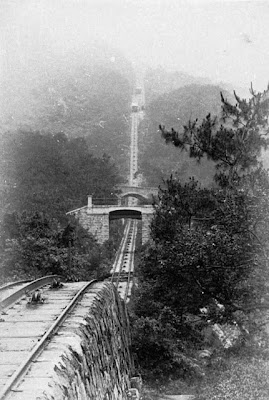 From Japan we boarded the S/S Paris Maru, a cargo ship bound for Seattle. I was in my element and all over that ship! One of the crew members had a small radio. I'd never seen one before. Pure magic! 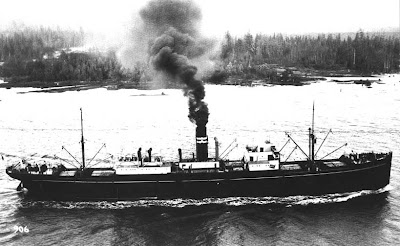 In Seattle we stayed with my mother's sister's family for awhile before heading by railroad to Chicago. Then a relatively short train ride to Anderson, Indiana, where we attended a reception in the Anderson College and Training Seminary chapel. Another train ride and we were in Torch, Ohio, where my father's brother was the pastor of a local Methodist Church. We settled there on a farm.