Little did I know when I read Noble Obsession: Charles Goodyear, Thomas Hancock and the Race to Unlock the Greatest Industrial Secret of the 19th Century, by Charles Slack, in 2002 that a dozen years later I would discover a more personal connection to the invention of vulcanized rubber. No, my family is not related to Charles Goodyear; that's not how we roll. We were the factory workers, the farmers, the miners, and the auto plant drones. 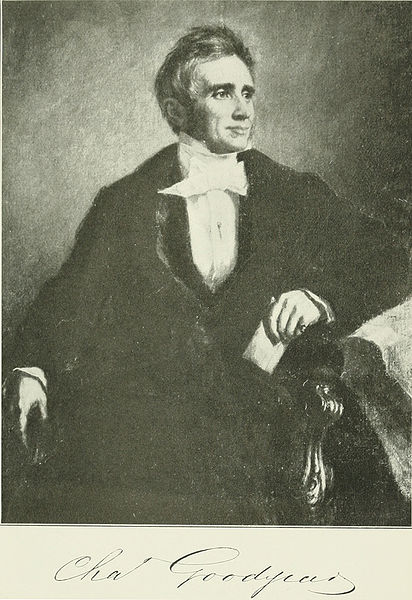 So it seems appropriate for me to talk about one of my union ancestors on Labor Day, our national holiday established to exhibit to the public "the strength and esprit de corps of the trade and labor organizations." In 1943, George Froelich* was elected president of the United Rubber Workers of America Local 45 in Naugatuck, Connecticut, and remained president for several years. George was my sister-in-law's grand uncle. The local union was formed in 1934.

George Froelich's father William Froelich and his mother Osida Eberle Froelich were born in Hess, Germany, and came to the United States separately in the latter half of the 1890s and married shortly after their arrival. They had at least seven children, including George, who is listed as 2 years old on the 1910 federal census. By 1940 George was working in a Naugatuck rubber factory.

Naugatuck prides itself on being the "Cradle of the Rubber Industry." Akron, Ohio may be the "Rubber Capital of the World," but vulcanized rubber was first manufactured in Naugatuck as early as 1843. 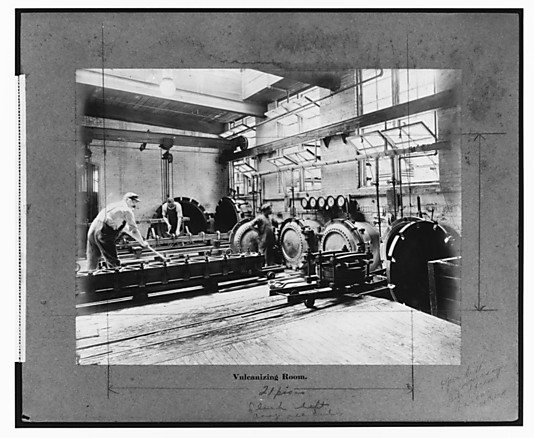 Manufacturing vulcanized rubber. Photo courtesy of the Metropolitan Museum of Art and was a gift of Mr. and Mrs. Martin Liefer

By 1892, there were many rubber manufacturing companies in Naugatuck, as well as elsewhere in Connecticut. Nine companies consolidated their operations in Naugatuck to become the United States Rubber Company. From 1892 to 1913, the rubber footwear divisions of U.S. Rubber were manufacturing their products under 30 different brand names, including the Wales-Goodyear Shoe Co. The company consolidated these brands under one name, Keds, in 1961, and were mass-marketed as canvas-top "sneakers" in 1917. They were the first sneakers.

The rise of the rubber labor union was often violent. Workers first attempted to organize in 1887 as part of the Knights of Labor. In 1903 the Amalgamated Rubber workers of America tried to organize Akron rubber plants and in 1904 they struck several plants in New Jersey for nearly a year but the strike failed. The union was broken by rubber companies by 1906. The Industrial Workers of the World (IWW), also known as Wobblies, organized a strike that failed in 1912. 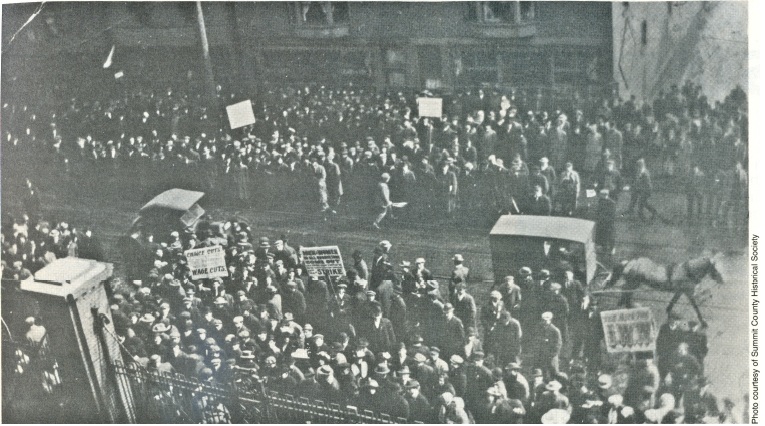 Changes in the national economy actually gave workers what they had been demanding -- an 8-hour work day, higher wages, and improved safety and sanitary conditions -- before the rubber factories became unionized. It was the National Industrial Recovery Act that gave workers the right to organize. The legislation was enacted as part of Franklin Roosevelt's New Deal.

By 1945 union membership reached 189,918 rubber workers. The union secured pensions for workers in 1949 and insurance for hospitalization in 1953. The introduction of radial tires brought an end to tire production in Akron, Ohio and in 1985, Goodyear razed its Naugatuck rubber plant buildings. 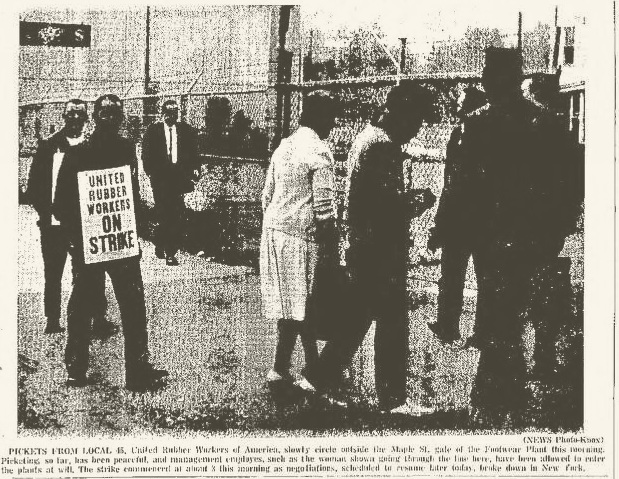 In 1995 the the United Rubber, Cork, Linoleum and Plastic Workers of America (URW) decided to join the United Steel Workers. 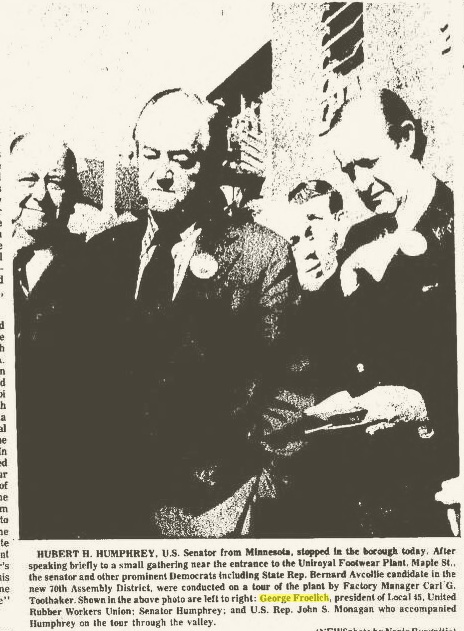 George Froelich on the far left with Senator Hubert Humphrey. Published in the Naugatuck Daily News on 25 Oct 1972.

George Froelich's wife died in 1991 and the Connecticut Death Index indicated she was a widow. I have not yet been able to locate a death record for George.
_______________
* George Froelich's older brother, Anthony, changed the spelling of Froelich to Froelick. Anthony's decsendants still use that spelling.
Posted by Schalene Dagutis at 6:04 AM