Out of Africa: Doctor Livingstone, I Presume

My Aunt Joan was born in Kijabe, Kenya, in 1921. Her parents were missionaries for the Church of God. Not long after Joan's birth, her mother developed altitude sickness as Kijabe was located about 7,000 feet above sea level. Her doctor advised her to move to the coast to regain her health.  Lilly Manson (Bradley) Bailey moved to Mombasa for several months. Her daughters, Elizabeth, Sylvia, and Joan went with her.  Their brother, Homer, describes in his journal an interesting meeting they had with Matthew Wellington, and included an old photo.

Mombasa is lovely town. One could easily watch the Arab dhows slowly sail into the old harbor, blown by a soft monsoon breeze. Or one might thoughtfully stroll about the ancient bastions of famous Fort Jesus, trying to visualize the lives lost in that place over the centuries. The bazaar where slaves were sold, where masses of men and women still go to buy or sell, is a fascinating spot.

Yet alive in the early 1920s was a man few of us have heard of. All civilized men readily recall Dr. David Livingstone. We know of his life, to a degree, as well as of his death. Seated between my sisters, Elizabeth on the left, and Sylvia on the right, is Matthew Wellington, which is his Baptismal name. 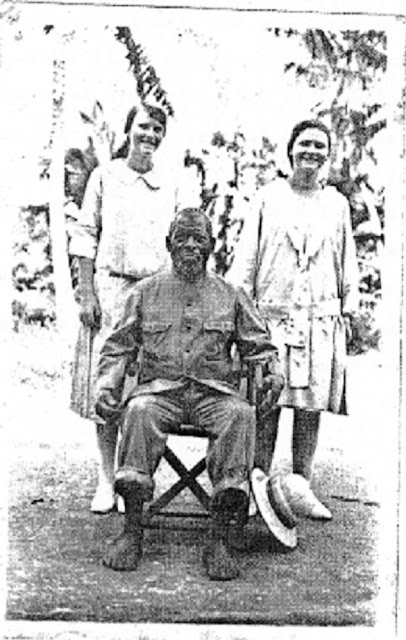 It was never my privilege to meet Mr. Wellington, but thrilling it would have been to have heard him relate how they prepared Dr. Livingstone's body for the long journey to the coast. Learning why they buried his heart near the spot where he died under a Mvula tree in Chief Chitambo's village near Lake Bangweulu in what later became Zambia.

What a rare memory it would have been to sit on a low stool, all decorated with beaded art, and hear the old one telling of the privations, the dangers from wild beasts, of the unfriendly tribes through which they had to pass, and to hear it all from this one man's lips. Amazing to think Doctor Livingstone's loyal followers believed this white man's body must be returned to his homeland beyond the seas.

That took courage, faithfulness, and a deep abiding devotion to one who had befriended them in Africa. They allowed nothing to deter them until they let their burden rest beside the ocean liner which carried his body away. For all time, David Livingstone rests from his labors in Westminster Abbey.  One of those who endured in order to make the Abbey burial possible now rests beneath the tropical sky in a simple grave with a simple marker not far from the city of Mombasa.

David Livingstone died in Chief Chitambo's village at Ilala southeast of Lake Bangweula in present-day Zambia on 4 May 1873 from malaria and internal bleeding caused by dysentery. He took his final breath while kneeling in prayer at his bedside. His followers, Chuma and Susi, carried his body and journals over one thousand miles to the coast for shipment to England. Chuma was only a boy when Livingstone and Bishop Charles McKenzie freed him from slavers in 1861. He was from the Yao tribe. Susi joined Doctor Livingstone in Chupanga when he was employed to cut wood for Livingstone's second journey.  It is not known if Matthew Wellington was the Baptismal name for Chuma or Susi. 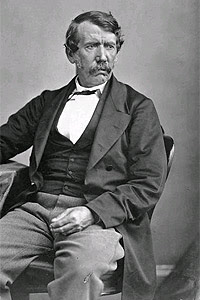 David Livingstone was one of the most popular national heros of late Victorian Era Britain. He had almost mythical status. What we most likely remember today is Stanley's meeting with Livingstone on the shores of Lake Tanganyika in 1871 when he uttered the famous words, "Doctor Livingstone, I presume?"  Stanley later tore out the pages of this encounter from his diary so we will never know if those words were actually uttered or not. 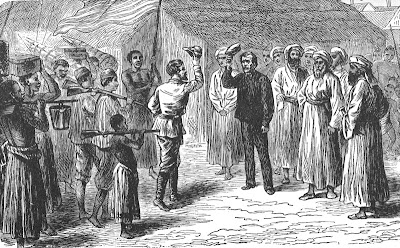 When reading Homer Bailey's journal which as written in 1991 shortly before his death, I find this one of the most interesting stories of his first stay in Africa, but there are many others....stay tuned!
Posted by Schalene Dagutis at 4:30 AM