Thanks to a work colleague, who is from South Africa, I know how big a deal rugby is in some parts of the world. I discovered a few weeks ago when researching my Semple ancestors, who emigrated from Scotland to New Zealand in 1862, that I have a famous All Blacks captain in my extended family tree. 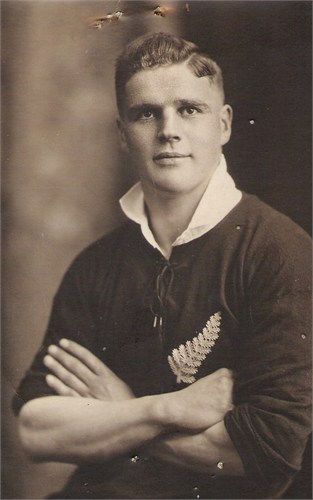 My South African friend had this to say:

As a kid growing up in South Africa the Springboks vs. All Blacks was, as far as we were concerned, the greatest rivalry in world sport. Those heros from the 1930s, 1940s, and 1950s were spoken of with awe.

The following profile was written by Lindsay Knight for the New Zealand Rugby Museum:

Archie Strang was a clever inside back, equally skilled at halfback or either five eighths position, who may have achieved even greater deeds in New Zealand rugby had he born in another era.

Strang was at his peak in the depression years of the early 30s. But as a stock agent in South Canterbury he often had trouble leaving his job and at the end of the 1931 season when he was still only 25 he retired to concentrate on his work having in those grim depression years being given an ultimatum by an employer for whom rugby had little interest.

A Southlander by birth, Strang moved with his family to Timaru while in his early teens and was an exceptional first XV player 1922-24 while at Timaru Boys High School. He had also played 1st XV rugby for Southland Boys High School in 1921.

He went straight into the South Canterbury representative side from school in 1925 and even as a youngster showed maturity and leadership quality. As a teenager he captained South Canterbury in his first season in a match against West Coast.

Strang in those seasons alternated between halfback and the five eighths, But it was as a five eigthhs that he gained a place in the South Island side for the 1927 interisland match which also doubled as a trial for the following year's tour to South Africa.

A top performance in that and the final trial won him a place in the touring party where his versatility proved to be an asset. He played in 14 of the 22 matches and with Frank Kilby injured for much of the tour filled in as a halfback on five occasions.

He played in the first two tests as a second five eighths and in the second match in the series drop kicked a goal with 10 minutes remaining to give the All Blacks a 7-6 win, their first test win on South African soil.

Despite this heroic contribution Strang was dropped for the final two tests. Because of work he was unavailable for the 1929 tour of Australia but proved he was still a national contender with a starring role for the South in that year's interisland match scoring a try, converting one and kicking four penalties for a personal tally of 17.

After captained a combined South Canterbury, Mid Canterbury and North Otago selection against the 1930 British tourist and scoring a try and a penalty in the 16-9 defeat he returned to the All Blacks for the final two tests.

Strang made the All Blacks from two South Canterbury clubs, High School Old Boys in 1928 and then Temuka in 1930. In the Temuka club's centenary book he is described glowingly as "a sound and heady first five eighths" and "a complete footballer."

His younger brother Jack represented South Canterbury as a forward in 1934-37 and played for the South Island in 1935. Archie Strang later became a prominent administrator on the South Canterbury union and for many years served international touring teams in any stay at Timaru as a liaison officer. He was also selector-coach for the Tauranga sub-union.