I woke up on Friday the 13th and found a very intriguing message in my box on Ancestry.com. A woman wrote:

Look up William Rolfe Kelley born 10-02-1832 in Virginia and died on 5-23-1922. His father was Radford Kelley. I think one of those trees had his wife listed as well. No one knew who the three sisters he had were. I am part Scandinavian and had a DNA match with another mixed ethnicity member here. Pretty close. 4th cousins. One of my Scandinavian grandparents is a Jennings and I see that Martha Ann Kelley married a Pleasant Jefferson Jennings born in 1820. So this is so great!

This was, of course, extremely interesting since I had three DNA matches with a common ancestor and one was a descendant of Pleasant Jefferson Jennings.  Could this be ancestor number two? And even more fascinating, her Ancestry.com profile included a photograph. If she was the woman in the photograph, then she was a very attractive multi-racial woman. Now this was a story!

Pleasant and Martha Ann had four children in Virginia and one child in Ohio before moving to Walker County, Texas, before 1850. Pleasant was an overseer at the Hightower plantation.(1)

William Rolfe Kelley was the brother-in-law of Pleasant Jefferson Jennings. The Kelley family was also from Virginia. William Kelley, his parents, Radford and Susan, and his younger sisters, Mary and Rhoda, were traveling to California "Gold Rush" territory when tragedy struck. Radford, the Kelley patriarch, died. Pleasant Jefferson traveled to Ohio and brought his wife's family to Texas. William Rolfe Kelley got a job as an overseer at the Todd Robinson plantation. 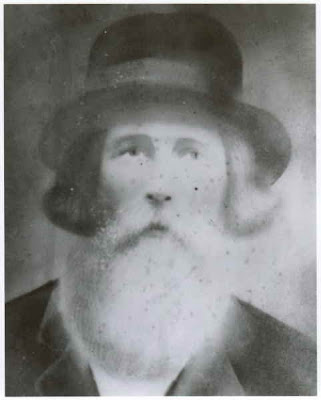 What's so interesting about William Rolfe Kelley you ask? He served with the Texas Cavalry in the Civil War. No documentation has yet been discovered that identifies a legal wife. Yet he had ten children by a former slave, Dinah Rush. All evidence, including his will indicates, theirs was a loving relationship and that he cared deeply about his children. Only federal and state laws of the time prevented William and Dinah from marrying. 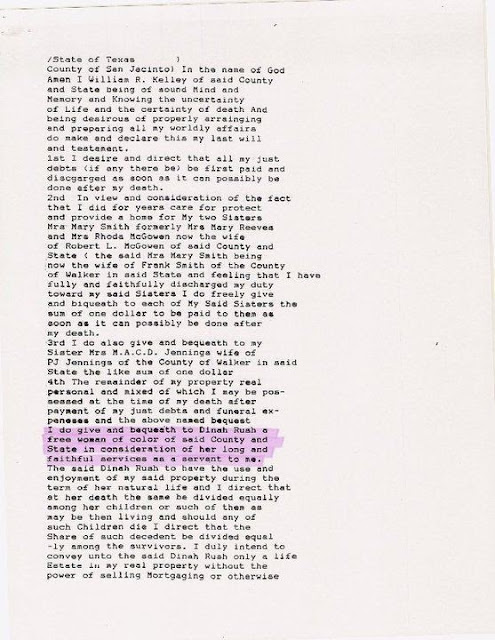 A great great grandson of William Rolfe Kelley has made bringing William and Dinah descendants together his life's mission.  Last year as a result of the hard work of several family members, the Texas Historical Commission erected a marker commemorating William and Dinah's life. The Houston Chronicle covered the historical marker dedication ceremony. 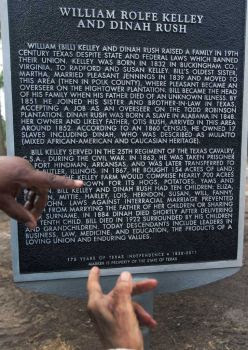 William "Bill" Rolfe Kelly and Dinah Rush raised a family in 19th century Texas despite state and federal laws which banned their union. Kelley was born in 1832 in Buckingham County, Virginia to Radford and Susan Kelley. Bill's oldest sister, Martha married Pleasant Jennings in 1839 and moved to this area (then in Polk County), where Pleasant became an overseer on the Hightower Plantation. Bill became the head of his family when his father died of an unknown illness. By 1851 he joined his sister and brother-in-law in Texas, accepting a job as an overseer on the Todd Robinson Plantation. Dinah Rush was born a slave in Alabama in 1848. Her owner and likely father, Otis Ruch, arrived in this area around 1852, according to an 1860 Census, he owned 17 slaves, including Dinah, who was described as mulatto (mixed African-American and Caucasian heritage).

Bill Kelley served in the 25th Regiment of the Texas Cavalry, CSA, during the Civil War. In 1863, he was taken prisoner at Fort Hindman, Arkansas, and was later transferred to Fort Butler, Illinois. In 1867, he bought 154 acres of land; ultimately the Kelley farm would encompass nearly 700 acres and become known for its hogs, potatoes, yams and cotton. Bill Kelley and Dinah Rush had ten children: Eliza, Lawson, Mittie, Harley, Lois, Herndon, Susan, Will, Fanny, and John. Laws against interracial marriage prevented Dinah from marrying the father of her children or sharing their surname. In 1884 Dinah died shortly after deliverying her tenth child. Bill died in 1922 surrounded by his children and grandchildren. Today descendants include leaders in business, law, medicine, and education. The products of a loving union and enduring values.

I hope you'll visit the Kelley Family website; their story is truly a testament to strong family ties. Of course, I bought the book about the Kelley family and am eagerly awaiting the next book about the women of the Kelley family.  Saturday, I heard from William Rolfe's great great grandson, who is absolutely passionate about his family history. He provided me with the marriage license for Pleasant Jefferson and Martha Ann Christian (Kelley) Jennings and a page from a book about the history of Walker County. I love people who share information freely! And I'm proudly claiming kinship, albeit by marriage, with the Kelley family.